I've got the best seat in the house, if you know what I mean 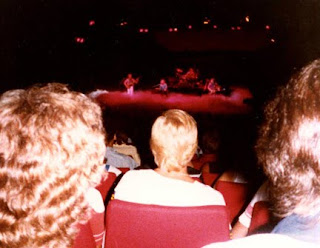 My hair-obstructed seats at A Flock of Seagulls, 1983.

The best seat in the house isn't necessarily the one that God - or Ticketmaster - gave you.
I recently came across a Winnipeg Free Press article from 1993 in which reporter Stephen Ostick outlined "the strategy to buying the hottest real estate for shows."

The article harks back to a simpler time, when you'd stand in line (not online) all night long outside the Winnipeg Arena in order to get front-row tickets to Simple Minds. You snoozed? You losed. Quaint.

When you got to the front of the line, you could also actually request where it was you wanted to sit in the venue - something that Ticketmaster's online entity doesn't allow you to do, though you can search by price and level.

But between today's presales, VIP seats, and the insane number of "armchair queuers" competing for the limited real estate in the venue, your selection often comes down to a scenario that would give Sophie pause: would I rather see or hear the show? Because, as Ostick pointed out in 1993, "only the best seats allow you to do both."

"To complicate things even more at rock n' roll shows, audiences rush the stage, forcing everyone to stand up, and creating a sweaty logjam around the stage that's uncomfortable if not dangerous."

True dat. Although I have to say that the scariest mosh pit of which I've ever been a part was at the Belly show at First Avenue in Minneapolis - an all-ages concert that proved that the scariest, most rabid audience is girls between the ages of 12 and 21.

Not that Ticketmaster will ever give you a choice, but here are my picks for the best seats in the house at Winnipeg's venues:

The best seats I've ever had at MTS Centre were for John Mellencamp and Tom Petty - and they were, by some weird happenstance, in the very same row.

The magic location is Section 117, Rows two to five, Seat 15; just above the floor, next to the stage, at the same level as the performer. John Mellencamp stared into my eyes when he sang Jack and Diane. And it wasn't as creepy as it sounds!

One of the better venues in town; great views and sound in most areas. However, the best view and sound combo is in the block of middle seats, rows 10 to 20, seats 10 to 40 (dead centre).

If best sound is your thing, take the second balcony - but don't expect to see a damn thing.

The two loges (fun fact: the Concert Hall is the only place in the world the word "loge" is actually still in use) are also pretty great. I saw R.E.M. from the top row in the loge on the left, and it ruled.

Row one and two are actually too close to the performers; I've seen up the nostrils of one John Oates, and I'd rather not do it again.

A very bizarre layout - who thought that off-centre seating was a good idea? - means that you can have great seats or be seated in the parking lot.

In Ostick's article, he singles out row eight, seat 18 as the best.

At all costs, avoid the second balcony - that is, unless you like watching your favorite artists from six storeys up at an angle that six physicists have tried to measure, but never lived to tell the tale.

The first six rows in the first balcony are great, and the floor is great for watching and listening - rows five to 10 being prime.

But why has the sound at the Burt been so insanely loud lately? It all started with the Strokes, and it came to a crashing crescendo, I'm told, at the latest Franz Ferdinand show.

Rows four to 10 in the middle are just about perfect. The low rows of the balcony are also tolerable, but further back than that: you're in another postal code.

The exception was the one time that the Winnipeg Comedy Festival took the people in the last and worst row of the theatre - including me - and brought us down to the fourth row on the main floor at the beginning of the show.

Your field of vision will be nothing but screen no matter where you sit, but rows D to H, seats 10 to 20 (the middle) offer the greatest "symmetry of viewing."

Banks of seats in a semi-circle around the stage mean that you have a great view from anywhere; but the centre section is better than the side sections for that "traditional play experience."

All of the seats are the same in these venues: pretty good.

But it's better to stay away from the back row of the Gas Station, where you can hear the techies rummaging around their gym bags in search of Doritos.

I haven't been to the new-and-improved West End. Curse that sold-out Hold Steady concert...

In the middle of that patch of grass is perfect.
Posted by Kenton Larsen at 9:45 PM