Second helping of comedy, anyone?

Our second comedy night was a huge success: even more people in the crowd and a butt-kicking headlining performance from one Dan Verville.

Special thanks to our genial and well-dress host, Jayme Vandenberg.

According to our "panel of experts," our top comics this time around were:

And, again, everyone else kicked butt as well. Great job one and all!

Keep your eyes peeled for our next big comedy show in January...
Posted by Kenton Larsen at 1:40 PM No comments:

The first of two Red River College comedy nights at the King's Head went off without a hitch. Last Monday's show was truly one of the best nights of comedy I've seen; and that's including Just For Laughs tours.

The main difference is that Just For Laughs is all about ego, Red River College comedy nights are all about excitement and - ultimately - confidence building.

My most pronounced memory of the night is seeing the crowd at the bar surging with laughter (a comedy mosh pit?) during Daniel Falloon's set. Great stuff.

The results are in, and our top five comics are:

Nobody even remotely bombed, so all of our performers should feel pretty great about how the night went. Next Monday's group has their work cut out for them; come out to cheer them on, Monday, Nov. 27, the King's Head, $5, doors at 7, show at 8.

And special thanks to headliner Cara Lytwyn and host Crystal Klippenstein - great work!

If anyone has pictures from the first comedy night, e-mail them to me, and I'll post 'em.

Thanks for the memories...

Posted by Kenton Larsen at 12:35 PM No comments:

"A Christmas Story" was a documentary? Who knew? 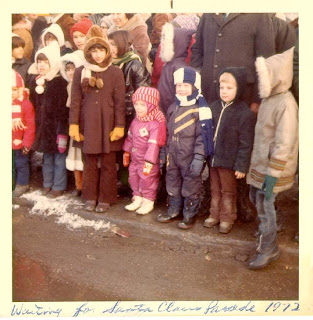 I ran across this photo today, which raises some questions:

1. If pointy hoods and pom-poms were all the rage in December of 1972, then why were my sister and I the only kids with snowsuits and head scarves?

2. Is the girl in the brownish jacket about to tell me that the Tin Man is her favorite character in the Wizard of Oz?

3. Is the mysterious adult standing behind the kids the same blurry figure we saw on the grassy knoll?

4. Why did anyone ever settle in Winnipeg if this was the gear they knew they needed to survive?

5. Is making kids stand in the cold to see a fictional character child abuse? 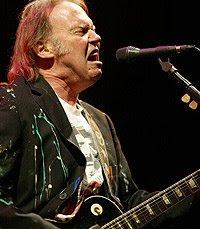 If there was any doubt about the fragility of the newspaper business, look no further than the strike by Winnipeg Free Press workers, now in its - aw, forget it - has anyone under 30 even noticed?

Back in 1977, I was a carrier for the Winnipeg Tribune; I'm fairly confident that it was 1977, because I got the route so that I could collect Star Wars figures, which had just come out that year. As far as I was concerned, the only way I could ever drive a landspeeder on Tatooine was to first deliver papers out of a wagon in Winnipeg.

It was a hard work: it was my job to get the paper delivered in rain, sunshine, sleet, and snow sometime every night between...oh, 6 and 10 p.m., if I didn't have anything better to do. OK, it wasn't hard work, but it was "work" at a time when other kids were often described as "drug-crazed" and acted as though shoplifting Mojos from 7-Eleven was a way of life.

And - no kidding - for some people along the route, it was like Christmas when they got their paper. It was common to see folks waiting in their front door for the paper to be delivered, having waited patiently all day and most of the evening for YESTERDAY'S news. Quaint, eh?

Despite being a Tribune delivery boy, the Free Press was the paper I loved to read. To me, movie reviewers Paul McKie and Leonard Klady were as great, if not better than, Siskel and Ebert. Gordon Sinclair was on par with 60 Minutes. The movie and concert listings were the only way to know what was up on the weekend. And anyone lucky enough to actually be covered in the paper was a celebrity for the ages.

That was before the dark times. Before the Empire.

Last night, Neil Young played MTS Centre. The concert was great - much better than the last time he did a solo show here - and he briefly talked about how his father, Scott Young, once worked for the Winnipeg Free Press. Young said that he still has a photo of his dad in a press room, drinking a bottle of Coke.

"If no one's going to write about this show," said Young, "I guess I'll just have to write my own review."

And that pretty much sums up why - yipes - we don't need the newspaper anymore. The Internet proves that there are limitless numbers of people who will be reporters for free. A question I ask my students every year when we talk about newspapers and print journalism: "Do you need to wear a shirt and tie and have a notebook to still be considered a journalist?" Increasingly, the answer is "no."

1. The only thing that keeps newspapers alive is ad revenue.

According to a friend who works at the Free Press, ad revenue was down a whopping $500,000 in September from the previous year. It is often said that Free Press reporters are the highest-paid reporters in Canada. How can a newspaper continue to pay out more money than what it takes in?

2. Why do we need a newspaper when we have eBay, Pollstar, and Craigslist?

3. The idea that the newspaper funnels information to "everyone" is dead. We all want to be our own content supervisors now.

4. And how, exactly, does reading about a plane crash in the paper on a Tuesday help me when I read about it online on the previous Saturday?

I fear that we're getting closer and closer to the last-season, last-scene of the Mary Tyler Moore Show. Would the last reporter out of the building please turn out the lights? -30-

As I mentioned in a previous blog, the state of the newspaper business is nicely (and depressingly) summarized in a documentary on the DVD set of the last season of the Wire, and on a really great episode of Frontline, called "What's happening to the news?"
Posted by Kenton Larsen at 11:13 PM No comments: