A bit of the Blue Revolution comes to RRC 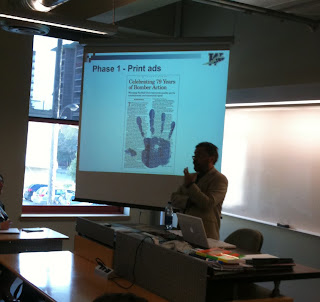 Maslowsky discusses the Bombers' 2009 ad campaign.
A big thanks to the Winnipeg Blue Bombers' Jerry Maslowsky and Kevin Guille for coming to Red River College today to speak to the advertising and PR majors.

Maslowsky, vice-president of marketing, and Guille, marketing manger, spoke to students in a wide-ranging discussion that included the pros and cons of marketing a sports team, how the Bombers can still win the Grey Cup, why student ticket prices cost what they do, and what's up with coach Mike Kelly.

Great discussion and questions from the majors!
Posted by Kenton Larsen at 2:40 PM