Mixtape: for the tragically hip on Halloween 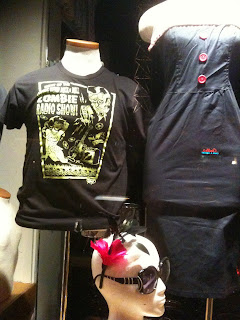 So, this year, the Mixtape Night of the Living Dead Rock N' Roll Zombie Radio Show T-shirt is gettin' it done for me - a worthy addition to my Motörhead dress shirt with skulls and crossbones.

Inspired by New York City's gritty and fun Trash & Vaudeville and Search & Destroy clothing stores, Mixtape is one of those rare New York experiences you can have without getting onto a cramped Air Canada plane, sprinting from Terminal A to B in Toronto, getting strip-searched in Montreal, ripped off by an unlicensed cabbie at LaGuardia, and stabbed and left for dead by Leonard Cohen in the Chelsea Hotel.

I was passing by the Osborne Village clothing store tonight, and stopped to take a peek in the store window. It reminded me that last year at this time, the advertising majors were working on a campaign for the store and its owner, Tracy Piche, who has an uncanny knack for knowing what the kids like before the kids even know what they like.

I've always liked the store, but I expecially like its alternative to the traditional Halloween outfit, which I've been fighting against since I was six, when my mother made me a skunk outfit - when I pulled a string, the tail went up, and everyone within a 20-foot radius ran for their lives.

Posted by Kenton Larsen at 9:37 PM