A great nighta comedy by a great buncha students 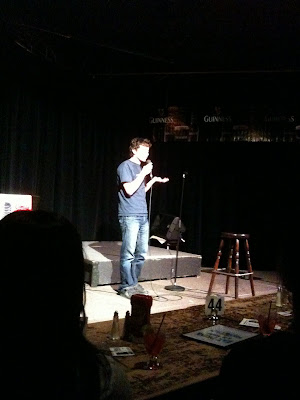 Aaron Cohen gives us three reasons why he may be Jewish.
Tonight I sleep with visions of dollar signs dancing in my head.

We kicked off the first of our two CreComedy nights at the King's Head tonight with a truly awesome night of laughs to a capacity crowd, courtesy of second-year Creative Communications students enrolled in my comedy writing class.

No one even remotely bombed, so all of our first-time performers should feel pretty great right about now. I know I do, and that's not the beer talkin'.

Congratulations to Daria Lysenko, who was rated by our esteemed panel of comedy judges as being the best comic of the night, and who won a $50 bar credit at the King's Head for doing so. Her father would be proud!

I've posted Daria's performance on YouTube, but the quality ain't so great (my fault), and there's some idiot snorting into the mic (my fault too - it's me). However, a more wonderful, DVD version of the evening will be available shortly. Watch this blog for more info.

Special thanks to former student and headliner Dan Verville, who absolutely killed, destroyed, and tore up the room. Go to Toronto and become famous, Dan, so we can come to visit and sleep on your couch for free.

And more thanks to CreComm grad Matt Cohen for organizing the whole thing. Yay for Matt!

Tomorrow, I talk all of my students into quitting school and going on the road, and giving me 10 per cent of the take. Are you with me?

As recorded on audience/judge scorecards:

Everybody did great on the scorecards; a scant eight marks out of 30 separated the high and low scores - incredible! 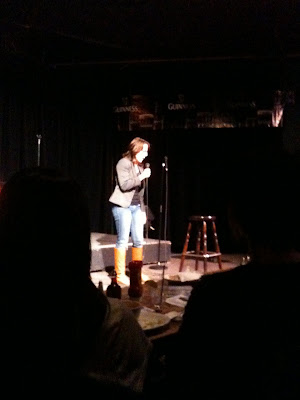 Vanessa Mancini - or is that Tina Fey? 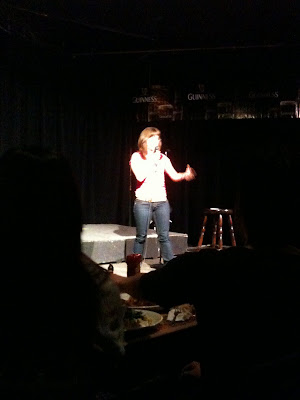 Kiirsten May gets animated.
Posted by Kenton Larsen at 10:28 PM