Save your local music store! 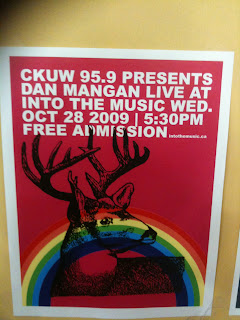 I got stood up twice at the King's Head yesterday, and I'm the better for it.

Maybe I wasn't technically "stood up:" one of my friends took ill and the second had an important meeting at work. And I did need to be downtown anyway, so I could come in third at music trivia night and get heckled for winning a box of crayons and Dave Coulier CD called "Songs in the Key of Beaver." No, you can't borrow it. Don't even ask.

But even better than that: I needed to kill time, so I headed over to one of my favorite homes away from home, Into the Music: just a hop, skip, and jump away from Red River College's downtown campus and even closer to the King's Head.

When I got there, I was surprised to find that not only was the store open after hours, but that a Canadian musician named Dan Mangan was performing this lovely ditty - "the Indie Queens are Waiting" - on the little stage at the south end of the store with his winsome band:

It's fitting that Mangan mentions "the local record store" in the song; because I grinned ear to ear as I listened to the song and soaked up the store's magical atmosphere: outside, rain. Inside, loners looking through CDs, moms holding kids, employees grumbling that they were now well into overtime hours, and a woman in a fuzzy polar-bear coat. My peeps!

Find the polar bear hiding in this picture.
I've written before about my love affair with the music store and record collecting (here):

"When I was a kid, the record store was a place that I - and every other 15 year old - went to get away from the family.

"There were entire summers that I spent hanging out at Records on Wheels on Portage Avenue, where I'd listen to the British imports, talk to folks as aged as 25 about what was cool to listen to (no older brother meant I had to do the legwork), and meet potential girlfriends (they all looked like the Cure's Robert Smith, but - hey - beggars can't be choosers)."

Indeed, hanging out at Into the Music yesterday made me not only hum "In Between Days," but to consider the much-hyped "Save Local TV" campaign and wonder why there isn't a "Save Local Music Stores" campaign to drum up government funding and local support for something that may very well be gone before TV ever vanishes.

I might be a hypocrite for celebrating the local music store on the same day I bash newspapers, but to me there's a difference; the local music store is more than just a harder-to-navigate iTunes: it's an art gallery, a performance space, a refuge from real life, and the original, bricks and mortar Facebook with old-school, flesh-and-blood friends.

In larger cities, that's allowed great music stores thrive - like the incredible Amoeba Music in San Francisco. But many haven't been so lucky, like the late, great Let it Be Records in Minneapolis, now a sad mail-order version of its former great self on Nicollet Mall.

In Winnipeg, we're lucky to have two, great music stores: Into the Music and Music Trader. At Music Trader, the staff know enough about great music to compliment me when I buy CDs by the Dictators and the Adverts, and I can glance up at the checkout till to see my glowing, bald head on one of the Polaroid pictures of their clientele they have displayed around the store. Great idea! Err....the Polaroids, not the glowing, bald head.

It's also the only store in town where the guy working at the checkout writes down the CDs I've bought, so he can e-mail the lead singer of the Epoxies and the young woman sorting music asks me where I got my jacket. It's enough to restore my faith in youth, music, and the Canadian way of life.

Take it away, Robert Smith!