In praise of Gervais (and Philips DVD players) 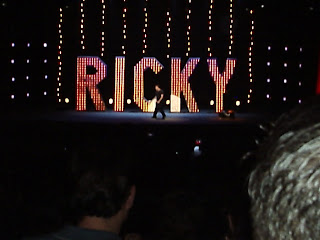 I saw Ricky Gervais on Letterman last Friday, and he was bearing good news: at long last, one of his stand-up specials will be broadcast in America on HBO (and available on DVD afterward). I believe it's scheduled for Nov. 15, though there's no title and the date looks like it's tentative.

I was at one of the three tapings at the WaMu Theater at Madison Square Garden last July, from which the special will be assembled (I took the blurry photo, above, at the taping).

I made the trip to New York primarily to see Gervais, who I'm convinced - after the Office, Extras, and the great British-only stand-up DVDs: Animals, Politics, and (my favorite) Fame - is the best comic actor and stand-up working today.

My best guess as to why his stand-up DVDs aren't available in North America is some distributor's misguided idea that North Americans won't get the jokes, thanks to references to Syd Little, Dawn French, Chris Tarrant, and the Chuckle Brothers. Who? Who cares? Whether you get the references or not, this stuff is frigging hilarious.

If you live in North America, do not be deterred: simply pick up a $40 all-region DVD player from Wal-Mart (I recommend the Philips one that says, "Plays all DVDs" on the box), order the three-DVD set from Amazon.co.uk (along with "Zidane," a great film that will never be available here either), and prepare to laugh until you cry. At Gervais, not Zidane.

Highlights include Gervais' take (he calls it "a lecture") on:

- A British anti-rape ad campaign ("What kind of society has to remind people not to rape?");

- His religion teacher, who says that "all the laws of the land are included in the Bible" (Gervais asks: "video piracy?");

- How a conversation between the first man with HIV and the monkey who gave it to him might've played out (given the choice between admitting to having sex with a monkey or eating a monkey, both man and monkey agree: "I ate 'em.").

Arguably, the best bit is Gervais' recounting of a taping of X-Factor, where he witnesses Sharon Osbourne repeatedly insult and humiliate TV presenter Chris Tarrant.

The NY show is devoid of these references and "North Americanized" to a certain extent. Still, I hope that it's a success; if it is, perhaps a larger tour of the continental U.S. and Canada will be in the cards. Here's to hoping.
Posted by Kenton Larsen at 6:08 PM No comments:

Of the Rock Junket Tour and Astroland 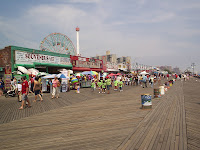 If you're going to NY, and have even a passing interest in music, you've gotta do Bobby Pinn's Rock Junket tour.

As a Canadian from Winnipeg, it was a special delight to see the Dictators Handsome Dick Manitoba's bar in the East Village (called "Manitoba's," of course).

Bobby knows his music and loves to talk; he reminds you of the punk older brother who always has more records and knows more about them than you. His knowledge and taste are impeccable, and he even made me believe that I should give Iggy Pop's Avenue B album another listen. I did, and it still sucks.

At the end of the tour, Bobby gives you a brochure with "things to do" recommendations, including what turned out to be two, huge highlights: having an egg cream from the Gem Spa (on Second Avenue at St. Mark's Place) and riding the Cyclone at Coney Island.

What's the funnest way to lose your wallet ever? The Cyclone at Coney Island, of course: (YouTube). The Cyclone is a trip in and of itself; from the creaky ascent on the wooden(!) boards to the neck-snapping shock of the first drop - has there ever been a roller coaster that's scarier?

It makes me all the sadder to find out today that Astroland - the famous roller coaster's home - closed forever yesterday. Apparently, it's a victim of more of that gentrification that New Yorkers (and everyone except landlords and developers) can't stand. Goodbye Astroland, hello condos. Whatta huge drag.

Supposedly, the Cyclone will keep operating, but I can't imagine it being the same without Astroland - one of the few truly magical places in New York that was open to everyone - young, old, rich, and poor. As the NY Times points out in the link above:

"Part of what made Astroland unique was its accessibility, said Charles Denson, a Coney Island historian and author of the book “Coney Island Lost and Found.” Rather than being an expensive, glossy and distant amusement park, Astroland was a place that was reachable by subway, a place where a visitor could shoot a water gun at a clown’s mouth and win a prize, or venture on kitschy rides with names like Dante’s Inferno and Break Dance that, while arguably seedy, were still loads of fun.

“It wasn’t Disneyland , but thank God for that,” said Mr. Denson. “It’s open to people of small means, and it always has been.”