Mommy, why do those two students hate me? 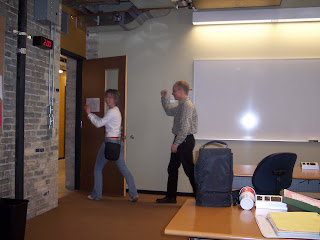 I congratulate another student upon the successful completion of
the Creative Communications program.
In stand-up comedy, its common for comedians to make a room full of people fall off of their chairs with laughter, but still feel that the night was a horrible failure because "that one guy in the audience" never cracked a smile.

And so it is with teaching.

Every teacher wants to make the subject matter come to life for all of his or her students, to have a rich and safe learning environment, and to see that translate into success once they've graduated. If I've said it once, I've said it a thousand times: "My success is my students' success."

Like every teacher, when I started teaching, my first thought was, "How do you teach again?" Literally, I couldn't remember a single thing about teaching from any of my teachers in any of my classes ever. Let's call it "educational amnesia."

So, I tried to remember the teachers who I liked. What did they do? No matter how I tried, all I remembered about them were vague pictures, like: "Mr. Harrington was funny." Or "Mrs. McCartney was weird." Or "Mrs. Abbott hugged me before I left for summer vacation."

It's true: all that students tend to remember about their instructors is the overriding personality trait in the classroom; OK, and the one time the instructor "loses it" on someone, because it is so out of character.

That jerk at the front of the classroom

So, that's the good news: students don't remember what you teach, they remember you. The bad news is: what if students remember you as being a jerk?

It happens, and if you don't believe me, just visit Rate Your Professor and look up...anyone. Yes, it's true: every single instructor on planet Earth connects and doesn't connect with students in the classroom. And, yes, the students who don't like you are more vocal than the students who do. Damn humans and their "nature."

(By the way, the first rule of the Internet also holds for Rate Your Professor: never search your own name.)

A couple of years ago, a friend was drumming up business for our Fringe Festival play in the Exchange District. He came across a group of young men, and offered them a Playbill.

My friend named everyone.

"Naw, that Kenton Larsen is an asshole," said one of them, a former CreComm student, who - despite our shared taste in music - never much cared for my insistence that he come to class on time.

"Well, you tell him that he's tardy!" isn't much of a retort and unbecoming of a teacher. So I only thought it.

This is a problem that seems to happen every year: in each class, you love and are loved by a vast majority of students. You are not loved back by a couple.

Should teachers be satisfied with this ratio, or should we be like comedians, wondering why we didn't get through to everyone? Was it the material? Was it the delivery? Was it something else that I couldn't observe?

At the very least, I think instructors should look for patterns and make connections between these students whenever possible - the better to address the problem in future years.

For me, the characteristics of the students I lose along the way almost always include people who, on paper, look a lot like me (an interest in music and comedy, for instance), but who also want to "change the rules" of school rather than abide by them.

I used to think that these students were out to sabotage the class, but I've since learned that it's actually a common student typology: the people who would rather complain about the unfair rules than change their behavior.

To students with this typology, I must indeed seem like a jerk. I love all of the things they love, and yet I still give them a hard time about late assignments and attendance. What's my problem, anyway?

There's someone for everyone

A couple of years ago, I had a student who fit this typology to the T.

He once made faces at me throughout an entire class after I told him I expected him to come to every class on time. He ignored all of "the rules" for drawing a storyboard, skipping audio and visual cues altogether. He got angry and agitated when I gave him a six out of 10, which I thought was pretty generous.

It all came to a head toward the last week of school, when he accused me of not responding to an e-mail. He pulled out a piece of paper, and I noted that he'd spelled my name wrong, which would explain why I'd never received it. I thought I proved my point, and he thought that made me a bigger jerk.

Earlier this year, I was waiting in line at Tim Hortons, when the same student (now a grad) walked into the school. I thought, "Oh, no, here we go again." To my surprise, he walked up to another teacher and warmly greeted him and shook his hand.

I guess everybody has somebody, on Earth, in Heaven, and in the classroom.
Posted by Kenton Larsen at 2:14 PM