Dan Falloon pens most memorable line of the year 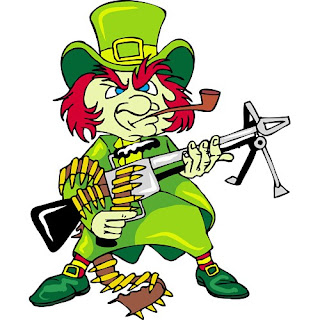 Dan, is that you?
Here's a clip (below) from Winnipeg funnyman, RRC grad '09, and - legend has it - Leprechaun.

Dan's opening line, which he wrote in Comedy Writing class and performed at the King's Head comedy night has only gained traction throughout the year and, I dare say, has achieved legendary status as one of the funniest and most memorable.

"I'm Dan Falloon and I don't look like most people."

It's a classic opening stand-up line. I love that it's simple - only 10 words long - yet still surprising, and, of course, funny. It draws the audience's attention to the stage. It would kill on Letterman.

Here's the mark of a great line: people can't stop repeating it. Many a-time this year, I've heard the following conversation:

Person one: "Who is Dan Falloon?"
Person two: "He's the guy who doesn't look like most people."

Lots of comics never get a good opening line or figure out their "brand." And some attempts are just a bit obvious or clunky to work. Glen Foster, who is one of my favorite Canadian comics, has always called himself, "That Canadian Guy."

Glen has the classic problem of just being "funny" and, ironically, in comedy that's not enough; you need to be a "gay comic," "minority comic," or "prop comic" for people to "get" you. And that's where Carrot Top and Jeff Foxworthy's "You know you're a redneck when..." came from. Yes, they're lame, but these guys are also selling out arenas.

My most successful opening line was always a bit hard to say, relied on the word "Mennonite" too much, and took on the format of a standard joke to work:

"I'm half Mennonite and half Norwegian. Which means tonight, on this stage, I will rape and pillage myself."

The punch isn't bad, I guess. The premise is true. "Rape and pillage," like "jaws of life," is always funny. And it does kill in Carman, Winkler, and Morden.

But I like Dan's better. So, without further ado, here's Dan Falloon, and he doesn't look like most people: