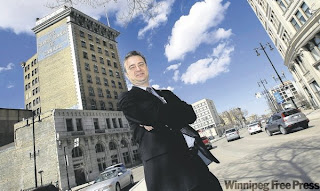 Nick Martin's article, "Core Values: RRC keeps growing downtown while expanding programs," has some new anecdotes about Red River College:
When I graduated from Red River College's Creative Communications program (the program in which I now teach) over 15 years ago, there was still a somewhat snooty attitude about "college versus university," so it's great to see how the downtown campus and the college's "core values" have changed that mindset in a relatively short time.

Based on my own experience, the college environment's practical, hands-on approach to learning, tight connections to the outside job world, and instructors who continue to talk with and support students after they graduate, is what sets RRC apart. A vibrant, downtown campus community is the icing on the cake.

This is my sixth year as an instructor at Red River College's downtown campus; as I like to say: "I came with the new campus." It's interesting to remember that the CreComm class that year didn't want to come downtown - it was too dangerous, parking was too expensive, and there was nowhere to eat lunch. Believe it or not, that year's students started a petition to finish their education at the old campus, so they could avoid these "insurmountable obstacles."

What a difference six years makes.
Posted by Kenton Larsen at 2:09 PM