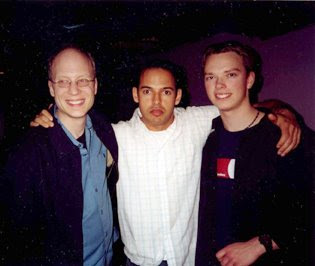 Hello? ABC? I named it, above. Please make the cheque out to my landlord, OK?

I performed with Majumder a couple of times - the first as a relative newcomer to comedy at the Just For Laughs homegrown competition. In a comedy world consumed by jealousy, rage, greed, sloth, envy, hate, gluttony, and (oh, yeah) laughter: I must report that he was really a nice guy.

After the show, which neither I nor my friends won (fix!), Shaun stuck around to talk to us, pose for pictures, and sign autographs. Then he blew our minds by saying, "Seriously, if any of you guys ever wants to tour with me, you can open for me anytime, anyplace."

We all knew that we'd never get validation from a higher source. It was only a year later that it occurred to us that, in fact, you only want comics to open for you if they're really, really bad. So, we eagerly hoped and prayed for more validation from virtually anyone who didn't want us to open for them, and we got it: from Mom, Dad, even - Lord help us - Full House's Dave Coulier.

All the best to Shaun in the U.S. And if you ever need to come back, I've got a great idea about how CBC could update the Beachcombers...
Posted by Kenton Larsen at 10:50 PM