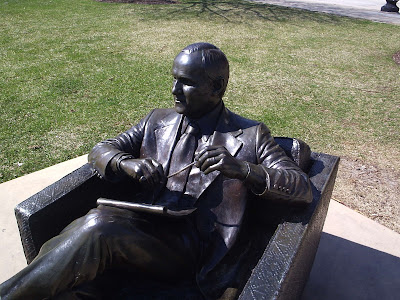 Everybody's favorite psychologist:
Bob Newhart in the park outside of Navy Pier. 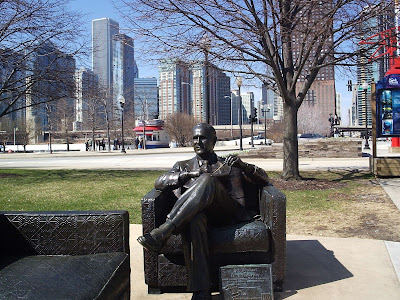 Hi, Bob. Another view of Dr. Robert Hartley - you've gotta love the stone sofa to the left.
Hey, I get to be Elliot Carlin! 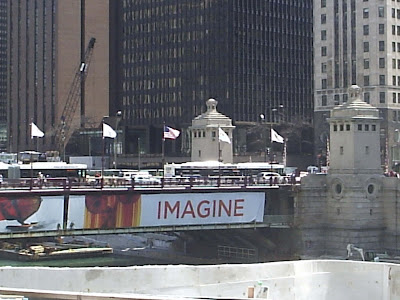 Bob's bridge on N. Michigan Ave - the banner is for Chicago's Olympic bid, which I didn't know anything about until now.
"Imagine..." Bob Newhart walking across it during the opening credits. 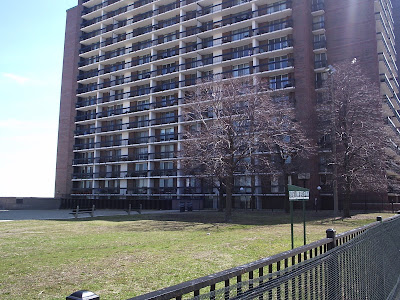 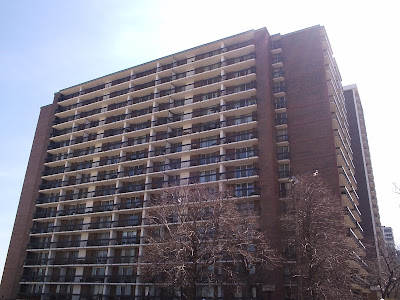 Zoom up to the top, left window, where Suzanne Pleshette is fixin' dinner for Bob and their wacky neighbor Howard, the spiritual precursor to Kramer.
I don't know what it says about me that I would rather hunt down exterior shots from the Bob Newhart show than hang out at, say, the Chicago Field Museum.

Yet there I was.

There's no denying the excitement I felt as I got closer to Bob's - or is that Dr. Hartley's? - apartment building on the show. Only once have a felt that same excitement, and that was when I went to Wyoming to see Devil's Tower. Of course, my child had been abducted by aliens and I was about to go on a long journey on their mothership, but that's another story.

As I got to the building, a caretaker was sweeping the driveway. He looked at me for a second, but seemed to sense that I was a Bob Newhart freak - so he ran. In the back of my mind played the plaintive trumpet solo from the Bob Newhart theme, and I secretly hoped Bob would be there shooting an extra for a DVD or something.

Yet I couldn't help but think that if I actually went up to apartment 523 that Bob and Emily would still be there.