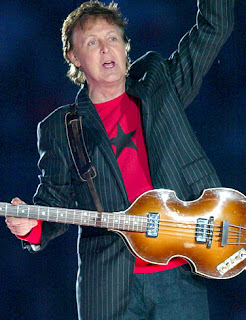 "A mass singalong to Hey, Jude? This has never happened before!"
I normally really love the New Music Express; I bought it as long as it was stocked at Dominion News, and its "best of the year" issues are always totally awesome.

But, this review of Paul McCartney's Coachella performance is about the worst thing I've ever read.

Quotes from the article, followed by my complaints:

"The former Beatle kicked things off with a Wings song, segueing into the Fab Four's 'Baby You Can Drive My Car'. "

What was the Wings' song?

McCartney has consistently started his shows with "Baby You Can Drive My Car," even starting his 1993 Winnipeg show with the song. So, he performed his standard set?

"Looking dapper in a casual black suit and white shirt, McCartney said, "We've come from many miles away to rock your roof tonight. "It's gonna be a good weekend here."

So, basically he gave the crowd some generic banter.

"We play this for Linda tonight," he said, dedicating the Wings song 'My Love' to his late wife. McCartney got choked up while singing the song he wrote for her, which they often performed together."

Finally, some news. But how did he choke up? Did he gag? Did he shed a tear? Did he stop the song?

"The audience, comprised of mostly young Coachella-goers and a handful of older people eager to catch a glimpse of the Beatles legend, paid close attention during McCartney's slower numbers and danced and sang along during upbeat songs including 'Live And Let Die', which was accompanied by an elaborate pyrotechnics display."

How big was the audience? A "handful" of older people? How many is that?

They paid attention to the former Beatle and danced during the upbeat songs? No way!

An elaborate pyrotechnics display during Live and Let Die? That's also been happening since 1990.

"It's Paul fucking McCartney!" shouted one man as fireworks shot up from the stage."

"McCartney later dedicated his song 'Here Today' to John Lennon, which he wrote for his late former bandmate, and the audience applauded long and loud for the legendary Beatle."

"The crowd seemed especially thrilled during the second half of McCartney's more-than-two-hour set, when he rolled out several Beatles hits one after the other, including 'Let It Be', 'Hey Jude' and 'Yesterday', which resulted in a masse audience sing-along."

Wow - that's never happened before. And the crowd liked these songs best? What the hell?! This is, like, so crazy!

I feel better now. Just in time to read, "Franz Ferdinand frontman refuses to show his nipples at Coachella." Sigh.
Posted by Kenton Larsen at 7:22 PM