Maureen Dowd bites the hand that feeds her 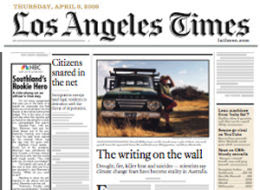 Spot the ad - or is it an article? - on the front page of the LA Times.
The death knell for newspapers continues:

NY Times columnist Maureen Dowd has done something that's not easy to do: publish an article bashing the newspaper business in a newspaper.

Her article, "Slouching towards oblivion" is here.

(Personal aside: I prefer "toward" to "towards," as does the Canadian Press. "Towards" sounds like my grandmother saying, "Safeways.")

1. Dowd says she keeps thinking of newspapers as "Norma Desmond," the washed-up actor in Sunset Boulevard. "Papers are still big. It's the screens that got small."

2. Eric Schmidt, the Google CEO, tells her that "newspapers will last 500 years, but only for a boutique market." Among them: people who take subways on the East Coast.

3. Dowd talks about the recent front-page ad for NBC on the front page of the LA Times (see photo, above), which resulted in outrage among the LA Times staff; disguised as a real news feature on the front page, the article was actually nothing more than a promo for the TV show "Southland."

4. She interviews San Francisco Chronicle editor-at-large Phil Bronstein, who tells her "the most hopeful thing you can say about print journalism (is) that old people are living longer."
Posted by Kenton Larsen at 10:42 AM