Coping with Japanese rock and roll and the Beatles 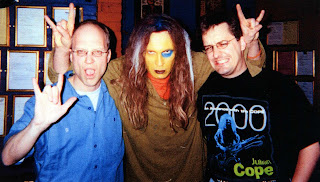 An audience with the Cope.
I'm halfway through reading Julian Cope's Japrocksampler: "How the post-war Japanese blew their minds on rock and roll."

I met Julian Cope with my friend Jason Beck about six years ago in England (see above photo) on one of those "fly a million miles to see a concert" whims that are hard to brag about in mixed company, given the vast amounts of time, money, and all-around geekiness involved.

Make that "a handful" of concerts: we saw two Julian Cope shows, the Divine Comedy, Neil Finn (with Johnny Marr), Harry Hill (the comedian), and Nick Cave and the Bad Seeds.

We ended up meeting most of these artists face to face; Neil Hannon of the Divine Comedy was notable, mostly because we told him we'd come all the way from Winnipeg to see him, and he responded with a droll, "I think you're mad."

But out of everyone we met, Julian Cope was clearly the man. 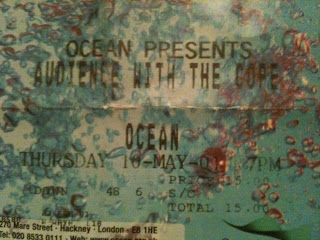 In North America, Cope is primarily known for his 80s hit, "World Shut Your Mouth." But in the UK, his work's had legs: he's released a handful of albums with the band, Teardrop Explodes, and over 20 albums as a solo artist; he's a celebrated author, antiquary, musicologist, poet, and stark raving mad lunatic - appearing on the cover of his album, Fried, in a tortoise shell.

At his first concert, which we saw in Leicester, he hit the stage in yellow greasepaint, an imposing figure in platform boots. He kicked off the show by staring down a particularly irritating man in the front row, who kept chanting "Copey! Copey!" Copey responded by telling him to fuck off. Nice!

After the show, we approached the backstage area with caution, and lightly tapped on his door. We were surprised when Mr. Cope himself answered. "Come on in," he said, as though he'd been expecting us.

Over the next couple of hours, we visited with Cope and his wife, drank his beer, and discovered that he's not only a fan of SCTV and Bob and Doug McKenzie, but also has an unhealthy fascination with Winnipeg's own Burton Cummings.

I later found this fact borne out in Cope's "Head on/Repossessed" autobiography and on his website here.


"Burton Cummings is a godlike white blues singer in the same league as Janis Joplin and Robert Plant, only with a better vibrato than either of those cats (he's the Tom Jones of the hash-head set I tells ya!)"

When we told him that there's a "Burton Cummings Theatre" in Winnipeg, he seemed ready to hop on the plane and come back here with us. He never did, but the invitation is still open.

As well, he promised to play "Out of My Mind on Dope and Speed" at his next concert in London, but that we'd have to signal him with a "Coo loo coo coo coo coo coo coo!" Beck tried the signal at the next show, but all he got was Cope saying, "I remember you." Better than "fuck off," I suppose.

Reading Japrocksampler, I've already got a list of about 100 new bands to check out, and I will be putting an order through on Amazon.co.jp's English-language site asap, speaking of vast wastes of money.

(For the record, his top two Japrockalbums of all time: Satori's "Flower Travellin' Band" and Eve's "Speed, Glue, and Shinki.")

However, one of the book's pleasant surprises is not about Japanese rock at all, but the Beatles; Cope credits their 1966 tour of Japan with changing Japanese music - and Japan itself - forever.

As a Beatles maniac myself, I found it interesting that Cope gives the Beatles much credit for transforming Japan, but describes them as "exhausted and irritable...alien lords."

The Beatles played a total of five concerts, 11 songs each, on the tour - the same 11 songs in the same order every time. Cope calls the concerts "more dutiful than inspired," and points out what a shock it is to consider that the Beatles were at the height of their artistic lives, having just released Revolver and Rubber Soul, but only played:

Cope says that when the Beatles left Japan after these perfunctory sets, it was "somewhat akin to watching four divinities leaving Earth."

Perhaps it's too much to ask for Cope to write an entire book on the Beatles - but if anyone could find something new and different to say about them, it would be him.

Ladies and gentlemen, the Beatles live in Japan, 1966, and the worst performance of Paperback Writer ever:

Posted by Kenton Larsen at 8:37 PM