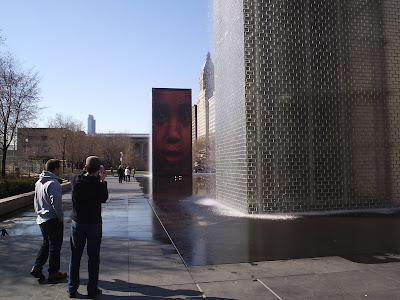 The Crown Fountain in Millennium Park. 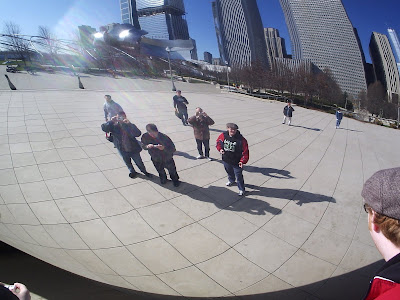 CreComm student Dan Falloon questions his own mortality as an, ahem, human bean. 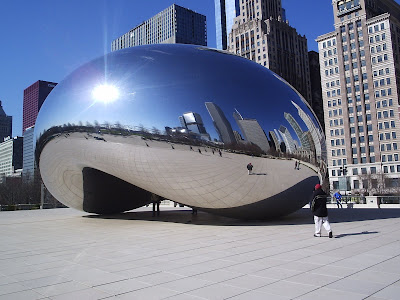 The bean reflects Chicago. Literally.
One of the highlights of Chicago is the public art on display virtually everywhere.

One of the most interesting pieces is the "Chicago Bean" in Millennium Park, which - I'm stunned to find out - is actually called "Cloud Gate." It was designed by British artist Anish Kapoor. According to the official site:

"The 110-ton elliptical sculpture is forged of a seamless series of highly polished stainless steel plates, which reflect the city's famous skyline and the clouds above. A 12-foot-high arch provides a "gate" to the concave chamber beneath the sculpture, inviting visitors to touch its mirror-like surface and see their image reflected back from a variety of perspectives.

"Inspired by liquid mercury, the sculpture is among the largest of its kind in the world, measuring 66-feet long by 33-feet high."

And it's really cool!

Again, according to the official site:

"The fountain consists of two 50-foot glass block towers at each end of a shallow reflecting pool. The towers project video images from a broad social spectrum of Chicago citizens, a reference to the traditional use of gargoyles in fountains, where faces of mythological beings were sculpted with open mouths to allow water, a symbol of life, to flow out.

"Plensa adapted this practice by having faces of Chicago citizens projected on LED screens and having water flow through a water outlet in the screen to give the illusion of water spouting from their mouths. The collection of faces, Plensa's tribute to Chicagoans, was taken from a cross-section of 1,000 residents."