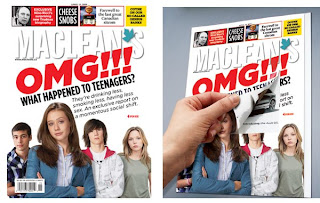 Trapdoor ad on the cover of Maclean's. Pic from Marketing Magazine.
It wasn't too long ago that the front cover of a magazine or newspaper was "untouchable" real estate for advertisers.

However, I got this week's Maclean's in the mail today, and was surprised to find a little "open here" slot on the cover. I did what it told me to do, and inside was an ad for the Audi Q5.

The ad, called a "trapdoor," was developed by creative agency Lowe Roche, clearly taking advantage of a desperate medium for a high-impact placement.

Marketing Magazine raises the spectre of whether this ad might contravene the Canadian Magazine Industry Advertising-Editorial Guidelines, but apparently this treatment does not.

"The only specific reference to the cover in the guidelines says that “No advertisement may be promoted on the cover of the magazine or included in the editorial table of contents, unless it involves an editorially directed contest, promotion or sponsored one-off editorial.”

I'm of two minds of this approach: on one hand, this is a great way for an old medium to make money. On another, it smacks of desperation - kind of like last week's Winnipeg Sun cover gatefold, which mistakenly was printed directly on the cover, so the "news" part of the paper - essentially what it's selling - was buried underneath. Oops.

Which reminds me: Vanity Fair has an excellent profile of Arthur Sulzberger Jr., publisher of the NY Times, in the current issue of the magazine (check out the article here).