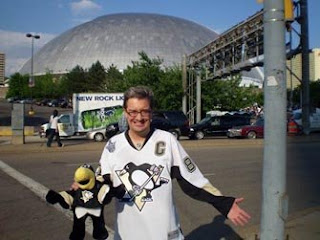 Does Jason Beck look desperate to you?
My friend, Jason Beck, has been mistaken for a desperate, hard-up Penguins fan on Deadspin.com. While that may be true, he's not the man mentioned in the article.

Apparently, a Pittsburgh man - NOT Jason Beck - was on craigslist last week, looking for a date to go with him to the Penguin's playoff game against the Flyers; the guy's a real prize, dropping dating conditions, like:

"Education: Some higher education or specialized training. We do have to be able to carry on a somewhat intellingent conversation, after all."

Since there was no photo of this fine specimen, the writer, Rick Chandler, simply Googled "Penguins fan," and there was Jason Beck's picture with Pengi Penguin in Pittsburgh.

So far, the page has been viewed almost 10,000 times - making Jason the anti-Susan Boyle of the stuffed Penguins set. And the talkbackers, always quick with an insult, have unleashed a whole lotta whoop-ass on poor Jason, assuming wrongly that "the guy in the picture is the same guy who ran the ad."

A sampling of feedback:

"Oh, if that stuffed penguin could talk. The sodomies it could tell!"

And they just keep getting better.

According to RRC's Journalism instructor, Duncan McMonagle, it might be hard for Beck to prove defamation, as he's a standup comic, who already makes fun of himself - so it's harder for him to prove "loss of reputation."

However, I spoke with Beck this morning, and he's taking it like a pro: he says he has no plans to sue, and - unlike most people - is actually kind of enjoying the fame and abuse.

At the very least, the site should consider rethinking its photos policy; or perhaps the headline should instead read, "Lazy writer uses wrong picture with article." Or, maybe we could just Google "Rick Chandler" and see what comes up: interesting.
Posted by Kenton Larsen at 9:22 AM