Observations and warnings from the British My Winnipeg


"If Liverpool didn't exist, it would have to be invented." - Myrbach.

Winnipeg never got bombed in World War II or spawned the Beatles, but getting bombed at a social while listening to the Guess Who has gotta be a close second.

It's hard not to think about the real parallels between our city and Liverpool (or maybe any city and Liverpool) when you watch Of Time and the City, a 74-minute documentary and meditation on urban change, memory, time and place.

Billed as "a love song and eulogy for Liverpool," Terence Davies' film is a dreamlike journey though Liverpool's history to the present.

The visuals are mostly archival photos and video juxtaposed with gorgeous music and Davies' acerbic voiceover, in which he quotes literature and poetry at the same time he slams the Royals, city planners, British establishment, and even organized religion.

The documentary is unavailable in North America, but you can order it from Amazon.co.uk and watch it on an all-regions DVD player or computer, like me! Or you can troll the torrents, if that's your deal. Troll.

What Winnipegger wouldn't instantly recognize themselves in Davies' neat observation about people and their complicated relationship with home?

Or his take on Liverpool's post-war architecture?

"Municipal architecture is dispiriting at the best of times, but when combined with the British genius for creating the dismal, it makes for a cityscape that's anything but Elysian."

Or even his description of the weather?

"A foot race with someone collapsing of heat stroke because the temperature rose a couple of degrees above freezing."

He saves some of his most-pointed criticism for Liverpool's industrial decline and inability to aspire to anything greater than bars, retail outlets, and "revitalized" docks, which now look a lot like Winnipeg's The Forks or any city with a waterside development - Baltimore? Duluth? Bar Harbor?

"We hoped for paradise, we got the anus mundi."

My trip to Liverpool

The film brought me back to my one and only visit to Liverpool - a Beatles pilgrimage, of course. 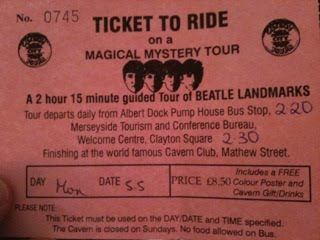 If there's something better than sitting in a bus on Penny Lane listening to Penny Lane on a tinny speaker, I don't know what it is.
Like a Torontonian asked for his description of Winnipeg, when I told Londoners of my planned journey to Liverpool, they warned me that "things are nasty in the north."

When I got to Liverpool, I wasn't disappointed by the lovely people and the equally lovely Magical Mystery Tour, even if Davies hates the Beatles and dismisses them in the film in seconds with a sarcastic recital of their most-famous lyrics, "Yeah, yeah, yeah, yeah."

I found that most Liverpudlians had a similar love/hate thing going with their city and country as we do with ours, more aware and intimate with its promises and failings than any visitor could be.

Sound familiar?
Posted by Kenton Larsen at 10:32 AM