My Google AdWords campaign over, I turn to Pat Sajak

It was one month ago that I went to the market to buy some Google AdWords so I could get my message of love online, peddle this website's new domain, and hold my head up high as a happenin' ad instructor.

Did it work? Am I happenin'? Awww, forget it.

AdWords is how Google monetized itself into the monster company it is today by selling search results and syndicated ads to advertisers who bid on keywords in order to sell their goods and services online.

Think of AdWords as the online version of Wheel of Fortune, if Pat Sajak took the winners' money home with him every day. 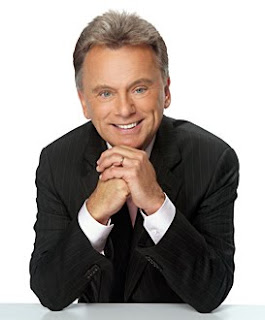 Google AdWords takes on a creepy, almost lifelike form.
I talk about the process of registering for Google AdWords here; here's how I described it at the time:

"In less than half an hour, I set my budget per month, cost per click, keywords, campaign timeline, and target audience based on geography, language, time of day, and demographics. Also notable: you can choose to only advertise when a person is using a mobile device, surfing the Web, or both."

The biggest challenge was writing the ad - Twitter's 140 characters ain't got nothin' on Google AdWords' constraints. I settled on this, little number:

Kenton Larsen's secrets!
Get schooled on Ad & PR in Manitoba
You must read this blog today...
Kenton's Infotainment Scan
Based on my bid for words and daily budget - it was low! - Google estimated that I'd get 14 hits a day for two cents a click.

Then, I sat back for the entire month and tracked the results.

Here's how the numbers panned out over July:
The keywords
The anecdotal evidence

I got emails from two former students who live out of town and found my website when they saw the ad - the promise of my "secrets" too much for them to bear!

So, at the very least, I reconnected with a couple of former students. Not bad for three bucks!

After hitting it big right out of the gate, my campaign lost steam and clicks as it went along - as this top-heavy AdWords graph clearly shows:

When your campaign starts tanking, as mind did, Google provides you with some helpful advice:

"Your keywords aren't triggering ads to appear on Google any longer. Your bid may be below the first page bid estimate."

Translation: "stop being a tightwad."

Yep, I didn't bid enough for my ad to show up on the first page of search results when a search matched my keywords. The amount you pay is based on advertising competition for the keywords, user search behavior, and "quality score" - how closely what you're selling relates to the keywords you've selected.

So, either my budget or cost-per-clicks bid was too conservative, which makes sense when you consider the competition there must be for "Winnipeg." Damn you, Winnipeg!

Next time, I bring a wheelbarrow of money

The lesson: the next time I do an AdWords campaign, I'll be sure to pony up the dough to make it "the greatest campaign the world has ever seen!"

Until that time, I'll be right here sitting in my underwear, eating Cheetos, and watching Wheel...of...Fortune!
Posted by Kenton Larsen at 10:34 AM