My favorite comic-book author and Letterman guest dies at 70


Dave and Harvey crash Live at Five with Roker and Cafferty.

It was a bad week for Cleveland: LeBron James moved to the heat and the Heat, and native son George Steinbrenner went to that big Yankee Stadium in the sky.

But, even worse, my favorite Cleveland underground comic writer, Letterman guest, and curmudgeon - Harvey Pekar - died from cancer at age 70.

In 1976, Pekar started writing comic books based on his life and job as a file clerk at the Cleveland VA Medical Center.

Pekar's American Splendor comics - the title is ironic! - are about working-class Cleveland and Pekar's mundane, regular-guy life: his paranoia, anger at the world, and himself.

I bought Pekar's comics as they came out at (the now-closed) Schinders in Minneapolis - one more reason to drive to the big city! - but for most people, the collection American Splendor: the Life and Times of Harvey Pekar is a good place to find out what's so great about the guy. 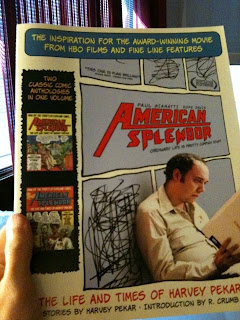 Pekar's graphic novel, Our Cancer Year, is his best self-contained work, chronicling his harrowing and depressing battle with cancer. To this day, I'm haunted by the panel where Pekar drops the groceries in the snow and can't pick them up - the sheer helplessness of it all.

For all of his self-disparagement, Pekar had a lot of success, the pinnacle of which was the great, Sundance-winning film American Splendor, starring Paul Giamatti as our anti-hero:


"Every American city is depressing in its own way."

Pekar also showed up in two of my all-time favorite Canadian documentaries, ridiculously unavailable online, the video store, or maybe anywhere - Vinyl and I, Curmudgeon. Pekar was an avid collector of jazz records and grumpy, which explains his appearance in both.

Pekar first came to my attention in the 80s in his handful of appearances on Late Night with David Letterman, which are notable for Pekar's subversive rants - altogether missing from late-night talk shows today.

This one got Pekar banned from Late Night "for life." In the pre-September 11 world, Pekar made Letterman pray out loud for "a terrorist:"

The life ban didn't last long: Pekar appeared on Letterman's Late Show twice after his Late Night outburst, again accusing Letterman of being a shill for the man and having contempt for his audience.

"On some of the shows, I was doing a deliberate self-parody, and now there's a lot of people that think I'm some sort of maniac, you know? I'd rather be liked than thought of as a crazy man, but with Letterman, I've been in a situation where you either lay down and let him insult you or you do something about it. Most people keep their mouth shut and let him dump on them. I don't wanna do that."

Comic books, talk shows, and Cleveland will never be the same:

Posted by Kenton Larsen at 8:28 AM