Dillinger's death: is my favorite marketing story a fake? 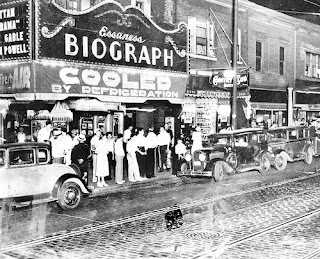 Get yer bloody papers here!
Is my favorite marketing story about John Dillinger's death too bloody good to be true?

On the recent CreComm trip to Chicago, we went on the Untouchables Gangster Tour - a fun bus ride through the mean streets of the city, which not only included such scary locations as Oprah's studio and the Blues Brothers' orphanage, but also the Biograph Theatre where Dillinger was shot to death in 1934.

And the guy on the street who shoots the bus with the water gun - not because he has to, but because he wants to - is worth the price of admission alone.

On the tour, our guides - one of whom was a dead ringer for David Morse - repeated my favorite marketing story, which I've repeated myself many times since the tour.

A newspaper boy was selling papers near the theatre on the night that Dillinger was shot. The boy was so marketing-savvy, he was mindful enough to rip his newspapers into shreds, dip them in Dillinger's blood, and sell them for a hefty mark-up.

I love that story! It encompasses all of the key rules of marketing, including utility, supply and demand as it relates to price, and the importance of striking while the iron is hot.

But it occurred to me recently that maybe the story had the ring of something "too good to be true" - the very thing they warn students about in journalism school, so that when they get jobs as journalists, they'll feel guilty when most of the stories they write fall into this category.

So, I've done a little research into this topic, and I haven't been able to find a single, reliable reference to this actually happening:

"There were also reports of people dipping their handkerchiefs and skirts into the pools of blood that had formed as Dillinger lay in the alley in order to secure keepsakes of the entire affair."

But nothing about the newspaper boy. And the original article to which it links back? "Could not be found."

"Dillinger was so well liked by the public, that when news of his death spread, women rushed to the scene, tearing off pieces of their undershirts or offering handkerchiefs, asking neighborhood kids to soak up some of the blood for their macabre souvenir."

"One woman soaked up a newspaper with it. She shouted, “I bet I’m the only one from Kansas City with some of Dillinger’s blood!”

"Women dipped their skirts in his blood, and children sold bloodstained scraps of newspaper for a dime."

This is a call

So, instead I'll put it out there:
The biggest heartbreak of all: eBay has not one bloody newspaper scrap with Dillinger's blood on it for sale. 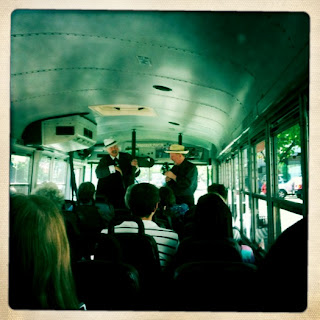 These guys in period costumes seemed so believable at the time.
Posted by Kenton Larsen at 12:58 PM