I think we're a clone now: getting my new ID

I finally got around to getting my birth certificate and SIN card replaced today; I've had my SIN since age 12 and my birth certificate since birth, so the time had come to finally get my ID replaced with cards that weren't covered in applesauce, chocolate sauce, and "the sauce" - the three stages of my life so far.

I expected a nightmare of bureaucracy - no, I hoped for it, because I wanted to be like Harrison Ford at the end of Raiders of the Lost Ark, walking down the front steps of the government building and loudly declaring, "Damn bureaucrats!" to no one in particular.

In fact, apart from a grumpy lady at the Vital Stats office, who freaked when I tried to hand her my number, there was nothing to complain about at all: no lineup and entertainment provided by a funny, little girl who climbed on the furniture and looked like her lollipop had just exploded in her face.

But even better was my visit to the hilariously named, "Winnipeg Centre Service Canada Centre" to get my SIN replaced. I know the name has something to do with our many official languages, but - two "Centres?" 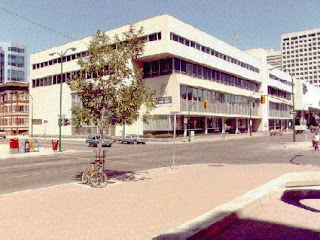 Winnipeg Centre Services Canada Centre Centre Services Winnipeg.
The experience there, again, was pretty easy to take, but it felt a little like I was living in a David Lynch film.

I walked in - no lineup again! - and right up to the front counter. The friendly young woman there took my info, and told me it would be a half hour wait. So, I sat down in a comfy chair, updated all of my apps, returned some emails, and half an hour later, I heard "Kenton!" as promised.

I stood up to find the same woman - now out from behind the counter and working as a name-caller and trafficker (alternate definitions of both titles).

"Have a seat at cubicle number seven and someone will be there to help you in five minutes," she said.

Five minutes later, that "someone" showed up: the same woman.

At first it reminded me of my favorite movie, Local Hero. A waiter tells our hero, "Oh, you can't see the accountant until noon. You might as well just wait here." At noon, our hero discovers that the accountant is...the waiter!

But as the woman filled out my SIN application, it suddenly occurred to me that I might be taking part in some weird government-employee cloning program.

Just as I began pondering the ramifications of such a program, she asked me - I swear to God - "Are you a twin?"

"It's a standard question for when we fill these out. Are you a twin?"

So, I got out of there as fast as possible, and I only realize now that I may have given my vital stats to a clone army.

If the next time you apply for replacement ID and you're served by three guys named Kenton who look exactly like me: run like hell!

Posted by Kenton Larsen at 1:03 PM