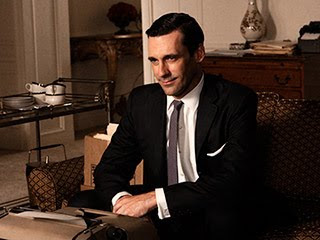 TV has never been better.

It occurred to me about half an hour into the season premiere of Mad Men, when I realized, "I'm enjoying this show so much, I never want it to end."

Mad Men did end, and then I watched True Blood, Entourage, and At the Movies (only three more episodes to go!), and I loved them as well.

Oh, sure, there's still a lot of crap out there, but pound for pound, day in day out there's almost always something good on TV, whether it's HBO, a film channel that shows commercial-free movies all day long, or guilty pleasures (Obama on the View, anyone?).

As Homer Simpson once said about TV, "Thanks to these brave men and women who give so much and ask so little."

A million channels: one for each niche

One of the reasons TV is better than ever is because there's more competition than ever: we have a million channels targeting a million niche markets, the move from "broadcasting" to "narrowcasting" all but a done deal.

So even if you think TV isn't for you, then there's probably still a channel for you.

I recently met with a CreComm grad who told me that her life's ambition is to get a job at the Food Network, which features all kinds of great shows, like...er...ummm....yeah, that one's not for me.

If your thing isn't food, maybe it's reality shows, classic sitcoms, gardening, westerns, or ice road truckers - here: have as much of it as you could possibly want, 24 hours a day.

By today's standards, Bruce Springsteen's "57 Channels (and Nothin' on)" is positively quaint:

I can turn on HBO almost anytime and find something worth watching (at night it gets dirty!), and as long as there's someone with an English accent shouting at hapless Americans or Jeopardy! is showing on a channel somewhere, I'm sound as a pound.

Of course, the downside of narrowcasting is that it's harder for TV stations and networks to compete for the ever-shrinking pot of advertising dollars and to come up with water-cooler shows that we can all talk about at work the next day (unless you happen to work in RRC's IT department).

There are some mass-market shows that buck the trend - Survivor, American Idol, CSI, House - and there are some shows that seem like they're mass market, because you hang around the same kind of people as you - Mad Men - but it seems that there's no such thing as a breakout show for "everyone" anymore.

12 Channels and Nothin' on

When I was a kid, we walked 1,000 miles to school barefoot, and had 12 channels on the TV - that was "cable" - and the popular shows were popular not because they were good, but because there was literally nothing else on.

This led to all kinds of crimes against humanity, including David Hasselhoff, an evil twin named "Garth," and a talking car in something called Knight Rider - a huge hit that ran on NBC in prime time for five years despite being complete and utter crap.

When Knight Rider came back in 2008, it was different times indeed. In a more competitive TV environment, crap really looks like crap. The show lasted 13 painful episodes and was canceled for low ratings.

Force fed on crap for our formative years, with only Atari to turn to, my generation became a cynical, ironic bunch - only SCTV and the Black Flag could satisfy our frustrations with the abysmal state of home entertainment:

So, here's the big question: given today's hearty buffet of quality entertainment - catered directly to our personal, on-demand entertainment needs - could we be in danger of losing our sarcasm, irony, cynicism, and all of the other truths some of us hold so near and dear to our hearts?

When I read about our TV networks lobbying CRTC and fighting with cable providers, I never see a single one of them make this argument: "Commissioner, it's in every Canadian's best interest to be force fed a diet of crap, so that they become cynical and don't take anything at face value, the better to lead worthwhile lives that are rich with meaning."

Why, it's our patriotic, God-given right to watch crap! Which is why tonight I hope you'll join me in watching the season premiere of Jersey Shore.