The four most provocative books in my library

Hello, devil, welcome to the book club from Hell!

I reorganized my library yesterday - a cross between the Jedi Temple library and the one that Belle has access to when she starts warming to the Beast - and came across some all-time classics that I forgot I even had.

If I'm ever being investigated for horrible crimes against humanity, these are the books that will be seized by the cops, called into evidence, and seal my horrible fate:

1. How to Steal Food From the Supermarket by J. Andrew Anderson 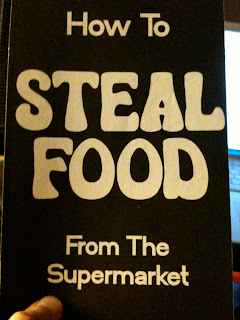 I bought this classic, really a pamphlet in a book cover, at Barnes and Noble in New York City. Come to think of it, maybe I should have stolen it.

I started reading it in the store and couldn't stop laughing; you've gotta love any book that makes the case for shoplifting because "we pay taxes for farm subsidies so that we can be overcharged at the store."

So, just like "not paying a cabbie" is "hitchhiking" to some people, "shoplifting," is "saving money" to Anderson, whose expertise on the subject of shoplifting is that he works as a supermarket security guard.

Anderson breaks the book down like this:
There's also helpful advice about what to do if you get caught: deny everything, offer to pay for it ("Never shoplift something you can't afford to buy!"), but don't run, and don't do it if you already have a criminal record.

"Try to look like a guy who listens to Christian rock and likes it...like you'd be proud to have Pat Boone as your father."

My father, a retired lawyer, once told me that certain criminals - I mean "people" - he represented scared him, because their criminal minds were so sharp, they were always one step ahead of everyone, including him.

I'd put Anderson in that category. His ideas show me that I'm not smart enough to be a criminal and maybe not even a teacher. Don't tell, OK? OK!

For instance, has it ever occurred to you that you could save bar codes from cheaper products, coat them on the back with glue stick, save them on a sheet of wax paper, and apply them over the real bar codes on more expensive products in the store?

How about paying a grocery clerk to "slide" the items around the scanner?

Too scary for me!

I originally bought this book to give someone as a joke gift, but I'm just not ready to say goodbye to it yet.

Besides, I may need a hobby when I retire!

2. I Wish That I Had Duck Feet by Theo. LeSieg 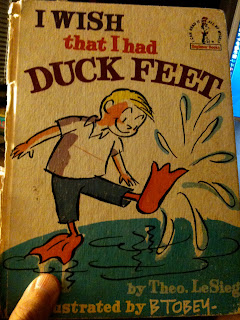 For most people, this book is notable because it was written by Dr. Seuss under a pen name.

For me, it's notable because I actually do have duck feet - I walk with my feet pointing outward, giving me a happy bounce that I overheard one student last year refer to as my "diva walk." Yes, teachers hear everything.

I have no proof, but I'm fairly sure my parents bought me this book to tell me that there's nothing wrong with my duck walk. Come to think of it, a Chuck Berry record would've been the icing on the cake.

The lesson: "And that is why/I think that I/just wish to be like ME!"

What's more, it worked: the book is falling apart, having been read and loved a million times.

3. You Are Going to Prison by Jim Hogshire 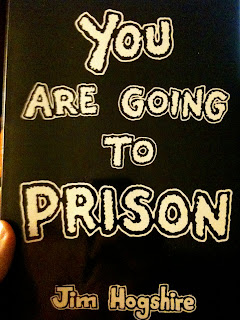 The logical must-read after How to Steal Food From the Supermarket, this is a survival guide and merry jaunt through the U.S. correctional system, from arrest to the electric chair and all the delightful steps between.

It answers every question you've ever had about the criminal justice system, including:
That would be a big affirmative.

This book became a Will Arnett film called Let's Go to Prison, which is good for a few laughs, but nowhere near the greatness of the book. 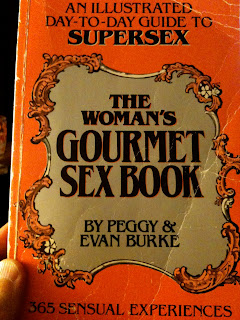 First of all, I didn't buy this book. No, really!

It was left at my house by a well-known singer in a local band, who carried it around because it made her laugh so hard. Me too! If she's reading this, I promise to give it back...one day.

"The Woman's Gourmet Sex Book" was published in 1983, but the advice in the book seems to come from a simpler time (read: sexist), as the book imagines a world in which men work hard and women wait patiently for them to come home, at which point it's their duty to pleasure them - 365 days a year!

The back-cover blurb says it all:

"This book is arranged in the form of a perpetual calendar, so it can be used year after year. Put it to use by turning to today's date, reading the entry, and letting the scenario that is suggested become a sensuous reality..."

Among the book's many helpful suggestions is March 9:

"Buy a package of Chinese fortune cookies. Open one of the cookies and insert a note telling him what you are going to do him at the first opportunity. Reseal the cookie.

"Get him to take you to dinner at a Chinese restaurant. Switch your cookies for the one brought by the waiter. He may be somewhat startled when he reads your message, but he will soon recover enough to help you get into your coat and rush you home to bed, where he will hold you to your promise."

I'm confused: who do I tip?

"Fake a chest cold. Tell him it's causing tightness in your chest. Ask if he would mind giving you a rubdown, and give him some lotion to use. Then smile and admit you were faking."

Nothing turns on a guy like the whooping cough.

"After you have finished making love, tell him you have never experienced orgasm till you began making love to him. Don't worry about the left-handed reference to other lovers. Men no longer expect every woman to be a virgin."

Left-handed virgins unite: you have nothing to lose but your dignity!
Posted by Kenton Larsen at 9:22 AM