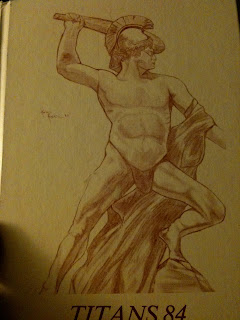 You can't tell a yearbook by its cover. I hope.

A pressing question for my students under age 22:
Do they still make yearbooks?
The question popped into my head yesterday when I wrote that barnburning blog post about how I invented Wii Fit and the Minutemen's Double Nickels on the Dime album cover. My proof (for the latter, anyway) is my yearbook photo, which came out four years before the album.

In your eye, Minutemen! Oh, sorry, that was yesterday's blog.

The yearbook is basically Facebook in book form, but as yesterday's blog post revealed: you can prove stuff with a yearbook because it's a snapshot in time, written in stone.

The yearbook's primary value is sentimental; when you get to my ripe old age, you pick it up, look at it, and think, "What was I thinking with those game-show host glasses and feathered hair?" Or, "I dated her for three years! What's her name again?" Or I went to school with "Nia Vardalos' sister?!" 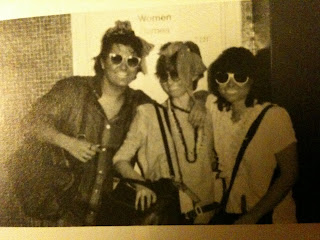 Nia's sis on the left.
With Facebook, you can search, link, poke, write on walls, friend, unfriend, tag, untag, and change history, if you're creative and own Photoshop.

But for all its interactivity, Facebook is always a work in progress. You can't prove s**t with Facebook - on Facebook I can have a full head of hair and say I discovered the law of gravity.

In your eye, Isaac Newton!

The history of the yearbook 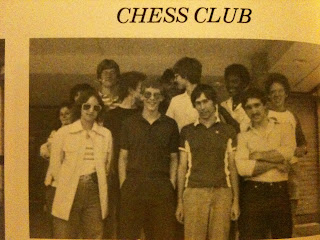 The original Facebook group.
A quick online search tells me that the yearbook was invented in 1845 by John A. Yearbook, who realized that he would die penniless if he couldn't think of a way to rip off high school students.

In the eighties - my high-school era - computers made the process so easy, the yearbook moved from being controlled by staff to being handled by students, which is how you get a yearbook cover that features a "titan" with a loincloth positioned remarkably low - for a yearbook and a man.

The business model was simple: you had a captive, niche audience made up of students who would pay whatever a yearbook cost, so they could get a keepsake from their "glory years," also known as "those awkward and terrible years you wish you could block out, but you can't because you've got this yearbook." 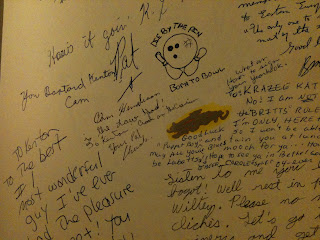 The original wall.
One good book deserves another

Facebook started out as an online yearbook for Mark Zuckerberg's classmates at Harvard, which then grew to include Ivy League schools, then all universities and colleges, then high schools, then everyone.

That's about when I discovered that I like individuals, but hate "everyone!"

My reservations aside, Facebook is now the second most-popular website after Google; to most people, its immediacy and brand makes the old, hardcopy yearbook look a little like yesterday's newspaper (or today's, if the front page features a thunderstorm photo from two nights ago).

Could it be that yearbook is to Facebook what newspaper is to Internet? The poor yearbook is so time consuming and costly to print, produce, and buy - should it even try to compete with a free, online service that lives and breathes interactivity? 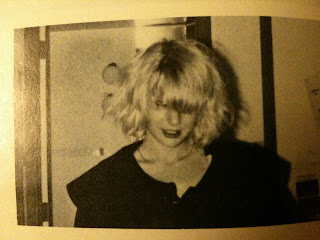 The original prof-pic. Is that you, Ally Sheedy?
Time wounds all heels

The yearbook's big niche is "sentimentality" - the one are in which Facebook fails, because the Internet is all about "what's happening now."

A yearbook increases in value with time: the longer you live, the greater the chance you'll grab the yearbook on your escape from a burning house.

When I ran across my yearbooks yesterday, I leafed through every page of every one. Time heals all wounds, so at this point even the high-school bully's profile made me laugh out loud: 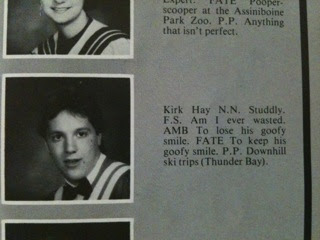 The original profile.
The yearbook's future?

The idea of an online yearbook seems cool until you consider the poor bastards who got stuck with a CD-ROM yearbook: if you're selling sentimentality from one moment in time, the format of choice has still gotta be "the book," doesn't it?

(Keep in mind that this comes from a guy who now reads all of his books on Kindle and iPad - magazines on Zinio and newspapers on PressReader. The yearbook: the happy exception to the rule!)

To this end, I think that social media could still play a role in the production and promotion of the hardcopy yearbook - and for all I know, maybe it is!

You get students and staff to submit their profiles, articles, and pictures online and make choices about the yearbook content - maybe you even create a yearbook page on Facebook, where yearbook staff keep everyone up to date on the process and invite students to participate along the way.

Participation begets ownership begets accepting the invite to show up and buy a book at the big yearbook launch/autograph session/party.

Then you continue updating the Facebook site as it turns into the 10- and 20-year class reunion planning committee.

And for the rest of your life, whenever you feel the need to get sentimental and away from Facebook, you can always turn to the original book of faces: 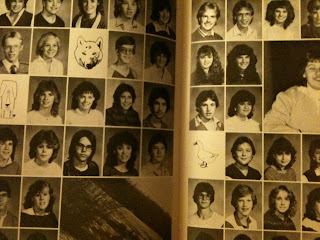