I'm reading the same book at the same time on the iPad, Kindle, and iPhone and I'd like to thank the good folks who made it all so probable: eBook competitors Apple and Amazon.

It's a bit like thanking BP and the Gulf of Mexico for all of that great oil we use in our cars, because most people consider Apple and Amazon to be at odds with their competing devices and bookstores - the Amazon Kindle and bookstore on one side, and the Apple iPad and iBooks store on the other.

Begun the great eBook war has!

But please allow me to be the Rodney King of eBooks for just a moment: "People, I just want to say, you know, can we all get along?"

There's been a lot of talk about which company has the better book selection and which has the better device. Why, if I had a nickel for every person who's said to me:

"What are you going to do with your Amazon Kindle now that there's an iPad? Use it as a paper weight/door stop? Huh-huh, huh-huh..."

How the two companies already get along

So, how is it that the two companies - mortal enemies - have together given me the best reading experience for my buck?

I started my shopping trip by searching both bookstores for Tom Bissell's Extra Lives: Why Video Games Matter - a breezy and brainy look at video games, and something of a response to Roger Ebert's assertion that "video games aren't - and can never be - art."

Reading a book about technology on new technology? How fitting!

Not surprisingly, the book wasn't available for download on iBooks, but the Kindle bookstore had it for just $11.99. I downloaded the book on my Kindle using its wireless service - Whispersync - and it was available to read about a minute later.

I hadn't planned to start reading the book yesterday, but the wait at the doctor's office lasted a little longer than Avatar with trailers, so I started reading the book on my iPhone using the Kindle app.

That's right: there's an Amazon Kindle app on the iPhone and iPad, which means that it had to accept the fact that not everyone would be buying a Kindle, and elected to make its books available to everyone, regardless of what device they wanted to use. It also means that Apple had to approve the app before it could be downloaded (for free!) on iTunes.

A rare moment of competitors doing what's right for the end user. Hooray!

Reading a book on the tiny iPhone screen isn't the greatest experience, so when I got home, I switched to my iPad; the Kindle app automatically syncs your last page read across all of your devices, including Kindle, iPhone, iPod touch, iPad, Mac, PC, Android and BlackBerry. Totally handy. 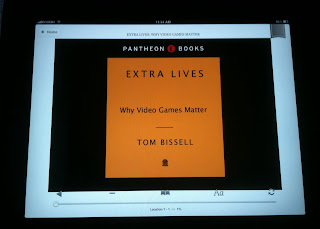 As well, the app takes the reading experience and makes it interactive: you can leave bookmarks on pages you want to read again, highlight important passages, write notes, and - most impressively - view "popular highlights:" parts of the books that other Kindle users have highlighted as being particularly interesting.

My Kindle has been taken out of the equation - it feels like reading the digital equivalent of a yellow newspaper. It works, but where's the Internet, color, interactivity, email, and music?

And worst of all: when I get onto the bus with my Kindle, nobody yells "Norm!" anymore.

The solution: a strategic alliance!

It seems to me that the natural fit here is for Apple to worry about the hardware and Amazon to worry about the library: iPads will continue to get lighter and include more features in subsequent releases - and we have yet to see a Kindle that can so much as search the Web convincingly.

In the short term, I think Amazon's best bet is to get rid of its Kindle stock ASAP by giving it away for free to strategic customers - the ones who buy loads of books. Amazon may be headed this way anyway, as it's already dropped the Kindle's price and started positioning the device as a niche player: the one that "books enthusiasts" should have.

To believe that the Kindle can compete with the iPad over the long term, though, is wishful thinking at best - the iPad has already outsold the Kindle in one-twelfth of the time.

When the free Kindles run out, it's time for the long-term strategy to kick in: Amazon gets out of the hardware business altogether, putting its promotional dollars behind its app and massive store - keeping eBooks downloadable on all, possible electronic devices with a focus on the dominant iPad.

It may not seem likely that Apple would include the Kindle bookstore as its "official iBooks library," but people demand selection - and that's something that Amazon can deliver. If it can continue to outgrow Apple with its eBook selection, ya never know.

Regardless: Apple will continue to sell millions of iPads, and Amazon stands to make billions of dollars on its huge and growing eBook library, which cuts the retailer's largest expenses right out of the equation: retrieving, packing, and shipping tangible books through snail mail.

Truly a marriage made in eBook heaven.
Posted by Kenton Larsen at 10:04 AM