Always an emcee, never a bridesmaid 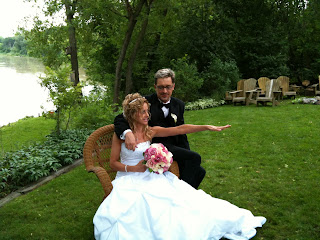 Beck and Beck. Emcee not shown.
Never wanted to be no best man.

I was born an emcee and I'll probably die an emcee.

The tools of my trade are but a mic and the ability to ignore everyone and everything around me - I believe it's called "being self-centered" - the better to tell jokes in the eye of a hurricane of nerves and egos, better known as a "wedding."

I've been an emcee at no fewer than 15 weddings, which I must point out that, as an unmarried, non-religious person, I'm against in principle. But if you can't beat them, you might as well make fun of them, right? Right!

This weekend, I emceed Jason and Chantal Beck's wedding, so huge, notable, and "royal" that it warranted a half-page article by Lindor Reynolds in the Winnipeg Free Press. I wrote about the article a few days ago right here.

It was great fun.

As I stood up at the podium in the empty reception hall, rehearsing my material as I waited for the guests to arrive, memories from all of the weddings I've emceed came rushing back into my mind, mainly because emceeing every wedding is like being Bill Murray in Groundhog Day: same nerves, same pressures, same Jedi master toasts to the groom. 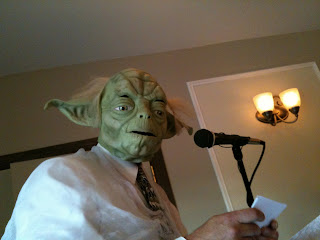 "Size matters not!"
How to emcee a wedding

As I always say in the first Comedy Writing class of the year, once you do stand-up, emceeing a wedding is child's play.

It's sort of true: the crowd at a reception is friendly, ready to party, and dying to have a laugh after a usually long and unfunny church service. Beck's was the exception - a fun church service, punctuated by the thunder outside (God's wrath, no doubt): 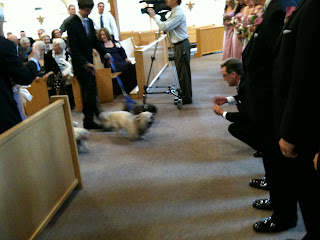 Lassie! You found us!
1. Set the tone. Be energetic, engaged, and funny.

Your first job as emcee is to set the tone of the evening.

To do this, you have to ignore what everyone around you has told you to do and just go for it: tell some jokes right off the top, even before you introduce yourself.

If you're boring or too laid back, people will start dreading the rest of the evening. If you're funny, they'll get into the party mode much more quickly.

Most brides and grooms first select you to be emcee because you're "funny" and they want you to tell jokes and make people laugh.

As you get closer to the wedding, they'll say, "Well there are some things we don't want you to talk about."

The day before the wedding, they'll say, "No jokes!"

Ignore all of it - these are normal bride and groom nerves. By the time they're at the reception, they're so happy to be married, they'll forget all about the instructions they've given you - and that "incident" they didn't want you to talk about.

Of course, if there has been an "incident," you won't talk about it, because you're classy.

So, say "welcome," and get right to the jokes.

Most people have been to so many bad wedding receptions, this is your big chance to show them that you're going to do things differently.

I opened Jason's wedding with this:

"Tonight we're here to celebrate the marriage of Jason Beck to his one true love: Sidney Crosby.

"Have you seen Jason’s wedding ring? You’ve gotta see it before the end of the night. Jason has little Pittsburgh Penguins' logos all over his wedding ring. It's very romantic: one for every member of the team he’s slept with.

"Every time a bell rings, a Penguin gets his wings!"

Alluding to sex is OK...but don't be gross, specific to the bride and groom, or talk about yucky bodily functions. People are eating, ya know.

2. Introduce yourself after the first joke

Hint about what craziness is to come while you do it:

"I’m Kenton Larsen – I’m going to be your genial host and emcee for the evening. I’ve known Jason since he was a kid, so I have lots of dirt on him involving sordid tales of Yoda statues and stuffed-penguin molestations. We’ll get to that in just a second..."

3. Just like stand up, say what everybody else is thinking

"Tonight we celebrate Jason and Chantal’s big decision to do the exact same thing they’ve been doing for the last 13 years. Living in the same house together. Eating the same food. Sleeping in the same bed. For this I rented a tux? I want my money back!"

4. Mock the groom, celebrate the bride

Show the bride and other speakers early that she's off limits: celebrate her patience and kindness for marrying such a dolt.

Brides are nervous creatures at their best, so this rule is for your own good. How good would it be to send the bride running out of the reception in tears? Not very!

"A little tribute to Chantal for putting up with Jason's shit for so long: the Yodas, Devo fan club, stand-up comedy, the sore knees...all of that crap. Chantal: you're lovely, smart, and talented. As far as I can tell, the only thing Jason has ever done for you is see Beverley Hills Chihuahua in the theatre.

"Chantal: it’s not too late to call it off! You haven’t slept with him yet, have you? Don't!"

5. Get down to business

Bathrooms, smoking rules, the head table, tinkling of glasses, blah, blah, blah. Lay out the rules and stick to them. Announce that things are coming up in advance, so people can pee and smoke without missing anything.

6. Stick to the schedule

Write a schedule with the bride and groom in advance of the reception. Assume it will start late.

If things start going longer than expected, the emcee's jokes are the first to get cut. Don't hog the mic at the expense of the other speakers.

No one got to hear this gem. Because it's not as funny as the rest of my "hilarious" gags, it was the first to go:

"I've traveled to Minneapolis to see concerts with Jason many times. From the outside, Jason may seem like an eccentric guy, but behind closed doors – he also snores like a bastard."

7. Be friendly and courteous to everyone who wants you to do stuff. Then do what makes the most sense.

Being an emcee is like being a ringleader. You have competing interests, all vying for your attention and wanting you to do stuff on their behalf.
When you get to announcing out of town guests, make fun of it and do it quickly:

"It's everyone's favorite part of the wedding: out of town guests! "We came all the way from Milwaukee. They'd better applaud us, or I'm going to the presentation bowl and taking back my $5." 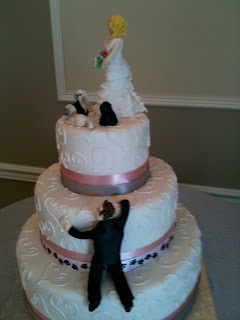 Is he climbing up or down? 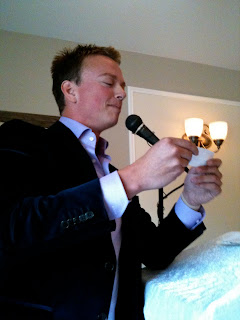 Weddings on Trial with Trevor Boris.
Don't make these speakers more nervous. Give them a five-minute warning before you bring them up, and be really kind and encouraging in your intro.

"You don't need to be a comedian to get up here. You can also just be a nice person, which this next person is..."

If the speaker is a professional comedian, you've got more leeway:

"Please welcome the Doctor Evil to my Mini Me. The Thing to my Mr. Fantastic. The Uncle Fester to my Pugsly: Big Daddy Tazz!"

8. Remember that the bride and groom are the stars

They are the world, and we are but players in their drama. Tonight, you celebrate your love for them.

My mistakes:
10. How to measure success.