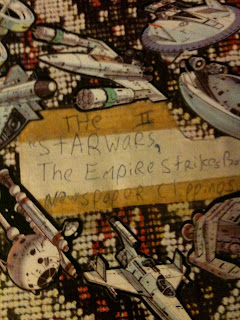 You can judge a scrapbook by its cover.
Just two days ago, I blogged about my unholy love for the original Star Wars trilogy, most notably the Empire Strikes Back, which is celebrating its 30th anniversary this month.

The very same day, I found my kick-ass Empire Strikes Back scrapbook - or is that "crapbook?" - full of newspaper clippings, ads, and promotions surrounding the original release of Empire in 1980.

First, let's pause to consider how nerdy you have to be as a 13-year-old kid to clip newspaper articles about a sci-fi movie, preserve them in an album, and save them into your 40s.

Some of the best stuff in the book includes ads for Star Wars things that I couldn't afford. Since I had no money whatsoever, that was pretty much everything. 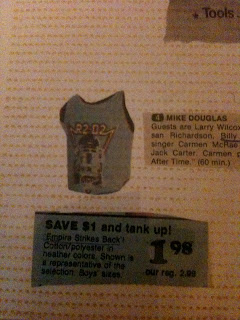 You'll notice in the above pic that I clipped the Mike Douglas TV listing and included it in the scrapbook. Before VCRs, there was no way to "record" a show other than to save the TV listings or to tape it on cassette, shushing everybody who walked into the room who would invariably ask, "What's on!?"

So, I can tell you that Billy Dee Williams promoted Empire on the Mike Douglas Show and Good Day! in May, 1980, followed by Carrie Fisher. And I can play you the cassette of me shushing my family. But you can't see these shows on YouTube.

However, the Star Wars cast's 1977 appearance on the Mike Douglas Show is a pretty great consolation prize:

Some of the movie tie-ins and promotions are remarkably charming in their content and execution. Take this newspaper ad promising between 75 cents and $5 toward your movie admission: 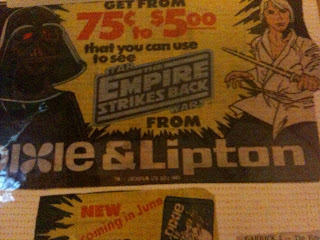 This low-rent promo needed sponsorship from Dixie Cups and Lipton? Try not to break the bank next time, fellas.

It's all about Boba

Much of the scrapbook is dedicated to the mysterious bounty hunter Boba Fett.

When Empire came out, he was really the only new character that most people had seen in advance, thanks to a cartoon that was part of the famously bad Star Wars Holiday Special in which 90 per cent of the dialogue was in Wookiee sans subtitles.

Kenner also produced the Boba Fett action figure well in advance of the film's release, and each piece of the character's clothing, armor, and weapon was carefully scrutinized in newspaper features like this: 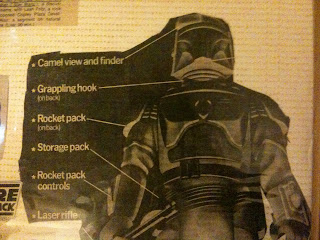 Would someone please tell me why Boba Fett's visor is called "camel view?" Better than the "camel-toe view," I suppose.

But probably the best of the clippings is a huge article from the Boston Globe with the headline, "Star Wars: 27 years to go," and the subhead, "Luke Skywalker will be 55 years old when the nine-movie series ends in 2007." 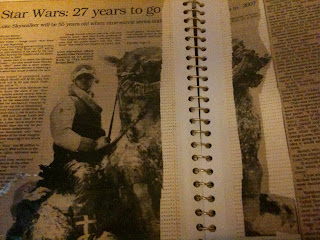 Flying through hyperspace ain't like cropping articles, boy.
This article is interesting because George Lucas now says that he never promised us nine films, only six.

Not according to this fine piece of journalism:

"George Lucas always had this nine-part series in mind," said Gary Kurtz, producer of the Empire Strikes Back, reacting to criticism that the public wasn't told that Star Wars was simply one chapter in Lucas' cinematic galaxy."

"After showing each of the nine treatments to the people at 20th Century Fox in 1975, they thought that episode four revealed more information about the characters and would make a better introduction to the story. But Fox only agreed to finance the first film while retaining distribution rights for the remaining nine."

Remaining nine, not eight? There is another!

In another interesting twist, Mark Hamill suggests that his then 18-month son play Luke Skywalker in the first three episodes. He says:

"It sounds crazy, incomprehensible. But when you think about it, the whole thing is crazy."

And he couldn't have been worse than Jake Lloyd as Anakin:

And now: to my Lost scrapbook. Where did I put that ad for John Locke underoos?
Posted by Kenton Larsen at 3:07 PM