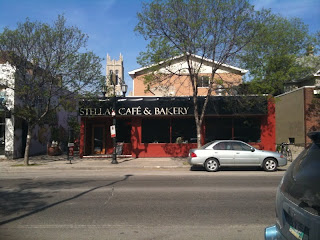 The best moment of my life happened here (interim president not pictured).

Anyone who reads this blog knows that I love to write about three things:
Cross number three off the list.

I finally got the "not-being-selected-to-have-breakfast-with-the-RRC president" monkey off my back today when I had ONE-ON-ONE breakfast with RRC interim president Cathy Rushton at Stella's on Sherbrook.

Yes, it's a glorious day indeed. A day to be long remembered. A day that will live on in infamy. The greatest day of my life.

Forgive my gloating, but - as I say - this momentous occasion has been a long time in the making.

To make a short story long, here's the background:

The college has an employee draw every month and the prize is Breakfast with the President - an opportunity to beef and bouquet (but mostly beef) everything and everyone at RRC with the college's top decision-maker.

The problem was that I didn't ever receive an invitation, while others around me attended so many Breakfasts with the President, they ran out of things to beef.

"Uh, I mentioned how sometimes the air conditioning is too chilly," said one of my co-workers about his last visit to Breakfast to the President.

"What about me?!' I shouted at the top of my lungs at lunch hour in the Atrium, attracting the attention of no one. "I have lots of important things I could beef to the president!"

So, I went to work at doing what I do best: complaining on this blog. Really, everything you need to know is in my pièce de résistance called, "I am the Susan Lucci of Breakfast with the President."

I'm happy to point out that the complaints struck a nerve. With me. With everyone else, they struck a comedy nerve. So many people got pleasure from my torment, it became a running gag around the office - mine and the upper reaches of Red River College's Tower of Power at its Notre Dame campus.

Which is how today came to be: interim President Cathy Rushton is such a good sport, she offered me one-on-one Breakfast with the Interim President in exchange for being able to have fun at my expense at former president Jeff Zabudsky's farewell.

Hey, I teach PR, so I know that there's no such thing as bad publicity. One "mention" at the former president's farewell (why, that's like 500 or more "unique impressions!") AND one-on-one Breakfast with the Interim President? It's like winning the lottery. Twice!

The breakfast was everything I knew it would be. Cathy is a nice person and wonderful conversationalist, and the Stella's Norwegian waffle is a great Norwegian waffle: ice cream, powder, waffle - oh, sorry, back to the topic:

Now that I've finally achieved this milestone - pinnacle of success, really - I'm available for consultation with anyone who hasn't yet been selected to have Breakfast with the Interim President. Because, like, my rates are cheap and I can totally get you in.