The iPad is beautiful - setting it up, not so much 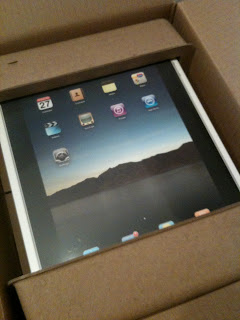 The iPad has landed.

That according to the UPS guy who delivered mine to my door. He said that Apple dispatched a special plane full o' iPads to the Winnipeg airport on Friday, so that all of the little kids awaiting them wouldn't be disappointed.

So, even though I got an email from Apple earlier in the day saying, "There's no frigging way you're going to get your iPad today," I got one anyway. Classic marketing trick: to under-promise and over-deliver.

I know that I'm completely crap at setting up anything - right my poorly assembled EQ3 sofa?

Whenever I have to build something, the same thing happens: I begin optimistically, slowly and methodically reading through the instructions. Flash forward two hours, when I'm swearing and throwing the item across the room in a blind rage.

So, I was going to wait until Saturday morning to set up my iPad. My wait lasted for about 10 minutes before I ripped into the box with a frenzy befitting of Smeagol in the Lord of the Rings trilogy.

To my evil, imaginary twin I say: "Leave now and never come back!"

Sure enough, my first instinct was the right instinct. My review, in a nutshell: love the iPad, hate the set-up process. I'm tempted to say, "It's all Rogers fault" but allow me to explain further.

I just hope you enjoy reading this review as much as I enjoyed setting up my iPad. Ahem. 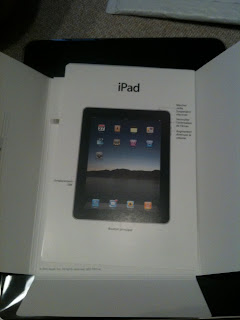 He wants a hug!
First, I should say that I purchased the iPad with Wi-Fi and 3G capability. That means that I can hook into whatever Wi-Fi network I happen to be near, or hook into Rogers 3G network, like a cell phone, and access apps and the Web and everything good in the world wherever I happen to be.

Yay! But, oh boy, Rogers didn't make it easy on me or anyone, judging by the wait time on the phone to Rogers' tech support.

After I ordered my iPad, and before it was delivered, Rogers went back on its original offer to allow iPhone users to add their iPad to their existing Rogers plan for just $20 a month, because that might bring its customers "pleasure" - and we know that cell phone providers aren't in the pleasure business.

Although the original offer was posted on the Apple website as an option, Rogers instead went with a one-price-fits-all strategy: $35 a month, which is $15 more than $20 - more pleasure for Rogers, less pleasure for us.

But for that extra $15, the customer service is going to be stellar, right? Well...

Two days before I got the iPad, I got the Rogers sim card in the mail. Points for timeliness.

What's a sim card? Not that you'll find out in the Rogers brochure, or from the URL that Rogers tells you to visit for technical support but actually takes you to an unrelated sales pitch.

The sim card is a little microchip that you insert into the side of the iPad on a little tray to get 3G wireless access. Before you can do that, though, you'd better invest in an Exacto Knife, because you'll have to cut along these very, very light creases to free the sim card from its imprisonment on a larger card.

Careful now, because one wrong move and - d'oh! You put the little card gold-chip down into the tray, close the tray and...

...sign up for your cellular service using the "Cellular Services" menu onboard the iPad in its "settings" menu. You simply enter your credit card and personal info, and you're automatically registered for a Rogers plan. In theory.

It took me seven tries and three calls to Rogers (I was transferred three times on the first call alone) before it actually worked.

Rogers did get back to me later in the evening - not to see if my iPad worked, but to give me a prerecorded "customer service survey" and I obliged them with the most sarcastic answers ever recorded at Rogers headquarters.

My biggest Rogers complaint: at the height of my frustration, and having given my birth date and postal code six times to prove my identity, a Rogers customer-service rep actually tried to upsell me on something called a "rocket stick." Sounds dirty, but I said "no thanks" anyway.

In comparison, here's the entire Apple iPad instructional booklet for your pleasure: 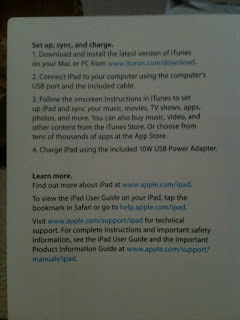 Once the Rogers service was up and running - three hours later - I finally had a chance to sit back and marvel at the marvelous screen. Totally marvel-worthy.

Anyone who says that the iPad is just a big iPhone is a little right and a little wrong. Yeah, the interface and apps work the same, but the iPad screen's dynamic color, depth, and resolution is really something to see.

I loaded my existing iPhone apps onto the iPad first; they worked, but looked pretty sketchy. It was then I realized that you have to download the iPad apps from the special iPad section of iTunes.

So I downloaded the ones that I've already used and like on the iPhone in addition to the ones that all the cool websites said I needed, among them:
To see the Guardian UK's Eyewitness photography app is to decide on the spot that you need an iPad.

Ditto for Wired Magazine, which is a much better read on the iPad than on paper, thanks to interactive ads, slide shows, embedded HD videos, and 360-degree functionality.

I'll be writing a full review of some of these apps soon - especially Pages, which I know many, many people are hoping and praying is great, so they can replace their bulky laptops with an iPad, confident that it has a workable equivalent to Word. 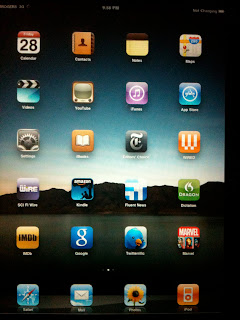 If it makes you appy...
iPad versus Kindle

You'll note that one of the first apps I downloaded is iBooks. Winnipeggers and Assiniboine Park zookeepers alike will be happy to know that it comes preloaded with Winnie-the-Pooh.

I also downloaded the Amazon Kindle for iPad app, which allows me to read all of the books I've downloaded onto the Kindle on my iPad.

Does this mean my Kindle is destined for the dumpster? Well, it's true that the iPad blows away the Kindle for sheer "wow power," but I see a place for both in my life. 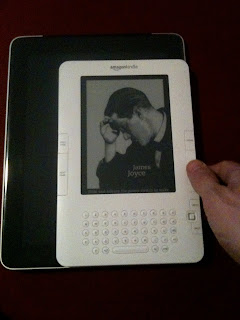 Ooh, my aching head...a Kindle atop an iPad.
The Kindle is much smaller and lighter, making it better for the bus. The iPad is significantly heavier, which makes it a good alternative for all of the things you currently use your laptop to do.

The iPad has a backlight and the Kindle doesn't - which you prefer depends on where and when you like to read. In daylight on the bus? Kindle. At night next to a sleeping spouse? iPad all the way.

Here's how Consumer Reports breaks down the comparison:


They've got nothing on the Mac and PC dudes.

I'm gonna be washing my hands a lot more. 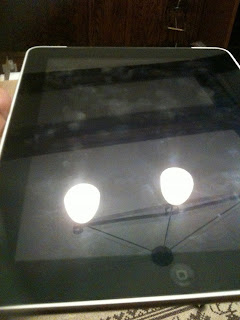 Ewww...
I'll be posting again soon when I've had some time to use the apps and experience the iPad in real life. Until then!
Posted by Kenton Larsen at 8:46 PM