Bring out your dead! Five ill-advised ads featuring dead guys (and one good one)

"They pulled him out of the cold, cold ground - and they put him in a suit of lights."
- Elvis Costello, "Suit of Lights"

It's true that the best thing celebrities can do for their careers is to die - the earlier the better, so they can be frozen in time in our minds and forever young - just like Alphaville, Laura Branigan and Jay-Z want to be.

Then, they can continue to star in TV ads for the rest of their deaths, the better to remind us of their artistic, political, and - of course - marketing genius.

No one asked for Martin Luther King, Einstein, Fred Astaire, or even Tiger Woods' dad to star in a commercial, and yet they all did. Some see the ads as a great tribute to someone who's gone but not forgotten, others see them as smearing the good name of someone who's no longer here to defend him or herself.

It does chill one's soul to consider a youngster asking his or her parents the question: "Was Martin Luther King a great civil rights leader or the spokesman for a telephone company?"

There are exceptions to the rule, as the last ad here proves.

But it's hard to imagine that it would ever be a good idea to feature Adolf Hitler in an ad - for pizza, Q-Tips, mustache wax, or anything. It's equally hard to believe that Kurt Cobain ever wore Birkenstocks in Earth as it is in Heaven or Gandhi did all o' that protestin' to sell iPads. 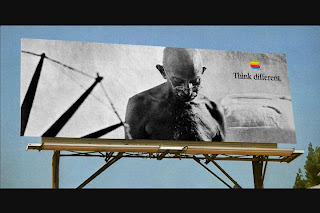 Or...don't think at all.
2. Che Guevara for automobiles: 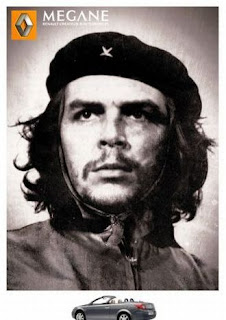 I protest. Anything but the finest of automobiles! 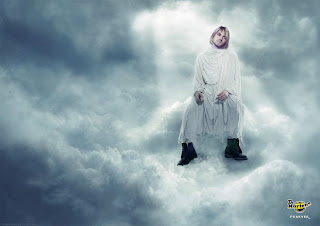 Cream cheese called. It wants its ad back.
4. Lennon and Ono for computers: 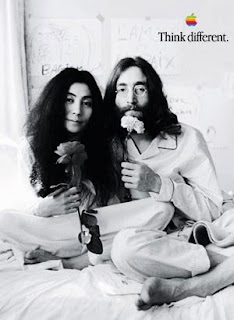 All we are saying is give Steve a chance.
5. Adolf Hitler for pizza

Bin Laden was unavailable, I guess.
And the exception to the rule:

Yul Brynner, who recorded this anti-smoking ad when he knew he was dying of cancer:

Posted by Kenton Larsen at 9:05 AM