I pledge allegiance to the flag of the United States of Canada... 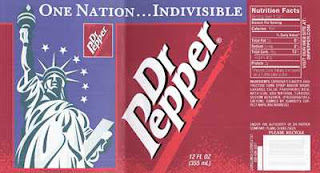 If you don't drink this can of Dr. Pepper, the terrorists have won!

I like to use the above Dr. Pepper packaging as an example in one of the first PR classes of the year.

"Anyone notice anything weird with the can?" I ask the class. Usually no one does, being Canadians and all.

Then, I pass around this letter from Dr. Pepper, which was posted on its website in response to the can.

The letter says that the can was intended "to show the world that we are a united nation of people who place a high value upon freedom," and outlines "the facts" without ever really clarifying what caused the controversy in the first place.

"So, what's this letter all about?" I ask. Again, a perfect question for a classroom of Canadians.

After we discuss possible theories, I ask the class, "Is anyone here familiar with the U.S. Pledge of Allegiance?" Again, usually not.

"I pledge allegiance to the flag of the United States of America, and to the republic for which it stands, one nation under God, indivisible, with liberty and justice for all."

Ahhhh, so it's all about "God," then. Good old God, always showing up to complicate things when you least expect it!

I thought of this earlier this week when the controversy about the Californian kids wearing American flags on Cinco de Mayo hit the news; long story short: the school sent the kids home to douse their "incendiary" garb.

Of course, all hell broke loose in the media. Film critic Roger Ebert has an interesting discussion about it here - and leaves very few stones unturned in dissecting of the issue.

The flag issue always seems like such a waste of time to me, especially when you consider that there's 5,000 barrels of oil (or more) being spewed into the Gulf of Mexico as we speak.

Besides, I think I have the answer to this one, having attended M.E. Fitzgerald School in Cambridge, Massachusetts, circa 1980.

Here's the deal I made with my teacher, Mr. Harrington: I stood for the pledge of allegiance when everyone else did, but didn't put my hand on my heart or say the pledge, being a Canadian. That seemed to work for everyone.

Mr. Harrington, however, felt that I was being left out, and he hated it when students couldn't recite the pledge in perfect unison, so I got the permanent job of saying, "One, two, three..." so that everyone would start (and finish) the pledge at the same time.

The lesson: if you want the Pledge of Allegiance done right: get a Canadian to count you in.

Dear California: a crate of maple leaf T-shirts is on its way.

Posted by Kenton Larsen at 5:03 PM