O Miles Mac, I stand on guard for thee!

It was a big day for me: I got to return to high school for the first time in years, living the dream pioneered by Rodney Dangerfield in Back to School, Kathleen Turner in Peggy Sue Got Married, and Sandra Bullock in Miss Congeniality.

Because I - like Sandra's character in the film - am an FBI agent/beauty pageant contestant who had to go undercover at a high school to...awww, forget it.

No, I went to Miles Mac high school this morning - my first in a series of three scheduled high-school visits - to talk to students in Miss Gillis' drama class about comedy writing and stand-up, and to promote the CreComm program to the next generation of potential students. 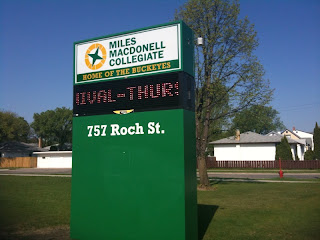 I have to admit to being a little nervous, having not set foot in a high school since I was last attending high school, which was in and around the summer of 1985: Tears For Fears rocked the charts, Back to the Future rocked the multiplexes, and Magnum P.I. rocked my video iPod, though the video iPod hadn't yet been invented.

So before today, this was really my only lasting high school memory:

And since I've graduated, I've heard that high schools have become pretty scary places. Packs of rogue students wandering the halls. Teachers giving everyone an A+ out of fear for their lives. That Lean On Me dude beating kids in the head with his baseball bat. You get the drift.

Of course, my news source was Chris Rock, but I firmly believe that he's right about everything:

So, vest in hand, I nervously made my way into the very dangerous neighborhood of Elmwood: gateway to Transcona and at least two ex-girlfriends I never want to see again, and there I found...the nicest, little high school ever.

As I walked into the school, I couldn't help but notice that students seemed surprisingly happy and motivated as they made their way to classes at the ungodly hour of 8:15 a.m.

They were also much better dressed than I remember being when I was in high school. Just check out this grad pamphlet I picked up in the principal's office: 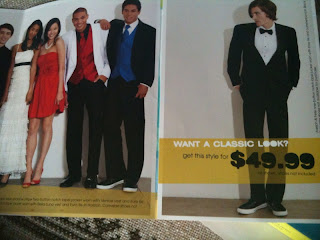 I love that "a classic look" now includes black sneakers! When I was in high school, "the classic look" was a sleeveless Judas Priest shirt and a mullet.

I found Miss Gillis, and she led me to her drama class, which is held in this nice school theatre: 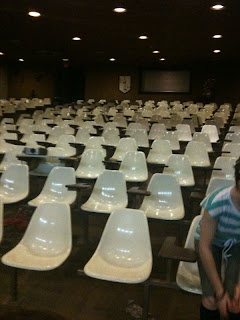 The Kenton Larsen Memorial Cometorium.
As I told the students, if I were a student at Miles Mac, I'd hold stand-up comedy shows in the theatre over the lunch hour, put up students who aren't as funny as me before I headlined, charge $8 at the door, keep the money, and rename the theatre, "The Kenton Larsen Memorial Cometorium."

Shortly after I walked into the theatre, the school played "O Canada" over the PA system, and the students stood at attention without prompting. Cool! It was the first time I've stood for "O Canada" since the Jets left the city (oops, sorry to raise that spectre).

We then had a great discussion about stand-up comedy, Conan O'Brien, jobs in comedy, and lots of other stuff. The students were fun, engaged, interested, and thoughtful in their questions.

I had fun despite the nervousness; 'twas the nervousness that made me act more a buffoon than usual: I said "shitty" a few times, suggested that everyone in the class go to a bar (Rumors: to enroll in its comedy contest), and encouraged the students to "take down the system from the inside!"

They humored me, God bless 'em. And the visit ended with me getting a lovely card, the "happy little note," below, complete with a lovely message of thanks: 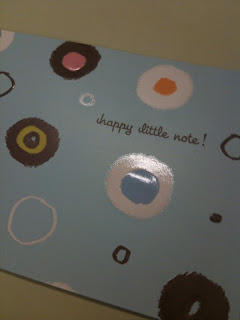 As I left, I vowed to go back to high school more often. And I got my wish: I'm going back to Miles Mac on Wednesday morning to watch the same students perform their comedy sketches.

Thanks, Miles Mac drama class for the best high school memories ever - and very little drama.
Posted by Kenton Larsen at 2:23 PM