It's Garry Shandling's DVD review: the post-modern precursor to Seinfeld 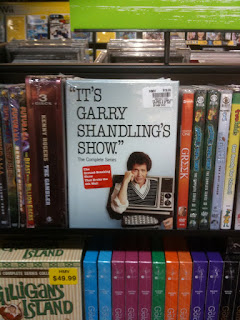 This is the review to It's Garry Shandling's Show. How do you like it so far?

There are lots of great things about feeling sick and miserable, but one of the best is the embarrassment of time that allows you to watch the entire 16-disc, 72-episode series of a TV series, guilt free.

So, it was with great delight that I've felt bad for the past few weeks, so I could dig into the entire series of It's Garry Shandling's Show, the most inventive, funny, weird, and post-modern sitcom of all time.

The show stars Shandling as himself, a neurotic, hair-obsessed stand-up comic, whose life is a sitcom he inherits when he buys a new condo.

In the first episode, Shandling moves into the space that, we're told, used to belong to Vanna White. It comes fully furnished with sets and cameras, allowing Shandling to wander between sets, look in on other scenes, and talk to the studio audience - just like Oprah and Phil!

Shandling deserves a lot of credit for predicting the demise of the standard sitcom format over 20 years ago, and aiming to destroy all of the hack sitcom conventions that, years later, were and are still being embraced by Friends and Two and a Half Men.

Even more startling is the degree to which Shandling's show begat Seinfeld. Simply put, Seinfeld owes the success of his own post-modern sitcom and its whole "show within a show" conceit to Garry Shandling:
Sure, Seinfeld deserves credit for bringing the form to the masses ("intelligence borrows, genius steals"), and for his year-after-year consistency and endurance, but Shandling is the innovator.

Among the recurring gags is Shandling's introduction of the insanely catchy (and equally post-modern) theme song sung by Bill Lynch, and what Shandling does during the 41 seconds the song plays.

In some episodes, Shandling sits uncomfortably and looks at the camera, in others he brings in guest stars to sing the theme (the Turtles! A Japanese lounge singer! Tom Petty and Doc Severinson!), and in this one, he shows off his great taste in literature, which includes a book by Gavin McLeod, which I have to find as soon as possible:

At its best, Shandling's show works on multiple levels, drawing us into the storyline and cracking us up with its inventive solutions to the characters' sitcom-inspired problems.

In one episode, Garry's young friend, Grant, gets beat up at school. Grant gets blamed by the principal for causing the fracas until an elderly It's Garry Shandling's Show audience member walks out of the audience and onto the set and tells the principal that she's seen everything, because she's been watching the show.

At its worst, the show sometimes gets away from itself by changing its own rules as it goes along and pushing the boundaries of funny into outright odd.

In one closing scene, for instance, castmember "lookalikes" parade through Shandling's living room and meet off camera in his bathroom, where we hear them say hello to each other. It plays like a scene from Luis Bunuel's the Discreet Charm of the Bourgeoisie or David Lynch's Mulholland Drive, coming off as more "bizarre" than "funny."

(There are smart people who say the show is about "the sacrificial role of the performer in society" and a throwback to Beckett, Sartre, and Buddhism; probably true, though probably not the best way to promote the show.)

The show does wear thin toward the end of the third season and within the fourth, when it introduces a recurring girlfriend, features too many "to be continued" episodes - something that was parodied in an earlier season - and brings back Red Buttons to do the same stand-up act that we've seen him perform on an earlier episode.

Reruns within a new show: now that's post-modernism that a network exec can believe in!

But really, these are minor complaints given the strength of the early seasons and the overall generosity of the DVD box set, which comes out to less than $2 an episode, and even less when you consider the 36-page booklet, hilarious episode commentaries, and interviews with former cast members (including Shandling himself).

The show is worth watching as an historical document alone, and for the many moments in which Shandling predicts the advent of reality TV and the Internet with these innovations:
It's Garry Shandling's Show is easy viewing: good-natured, entertaining, and funny. And, at 72 episodes, take it from me: it makes being sick and miserable your best option.

Posted by Kenton Larsen at 1:36 PM