One week of Kindlin', makin' friends, and influencin' people 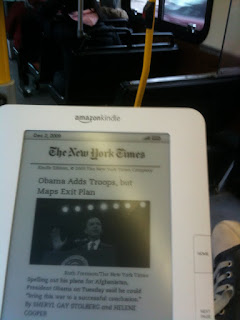 The Kindle, Winnipeg Transit, Barack Obama, and my left foot.
It's been one week since I got my Amazon Kindle in the mail, and it still makes me feel, as Madonna once sang, shiny and new.

For the unfamiliar, the Kindle works for books, magazines, and newspapers about the same way the iPod works for music: you download your literature on a wireless connection, then read it on an Etch a Sketch-like screen, only it's glare proof and thinner.

It's newly available from Canada, and ships from Amazon.com.

When you're reading the Kindle on the bus, it's impossible not to feel like you're Tom Cruise in Minority Report - minus the looks (but not the acting ability!).

But at the same time, I predict that within five years, I'll look upon this version of the device with disdain and think, "Whatta piece of junk," much like I do with my chunky-style iPod and its crazy, clicky wheel back from the early 1800s.

After one week of of Kindle use, here are my observations:

What Kindle is good for:

Every time I've read the Kindle on the bus, a person or people have asked me, "What is that thing?" When I show them, they instantly want one.

So, listen up fellow creepy bus people: it instantly makes you more lovable to have a Kindle! Talk about social media.

Despite some reviewers kicking the crap out of the screen, I love it.

I still think it feels, looks, and reads like paper, and I've had no problem consuming books, magazines, and newspapers. Even the deeper reading required by book-larnin' works for me on the Kindle.

And the pictures still look fantastic - black and white, yes, but crystal clear.

So, why so many naysayers? Probably the same people who said that we'd always have to print the stuff we read on the Internet.

At first, it just seems "different" to be reading a book on the Kindle, but I've already overcome the screen factor, not to mention the "geek" hurdle of taking it out in public.

In the morning, I turn on the device and - blam - there it is. Not so much as one issue with what Amazon calls its "Whispernet" wireless service.

I've downloaded one book, Truth, Lies, and Advertising, and it took about 30 seconds to appear on my "home" screen.

I haven't deliberately tried to run it down, but at the end of the day, there's still usually over half or more of the battery power remaining; it seems to last a lot longer than the battery power in my iPhone which disappears quite quickly (especially when I'm shooting video or taking pictures).

5. Selection (for most things)

It would be particularly great to download overseas content, like Q and Uncut Magazines, but BusinessWeek, Time, Forbes, the Atlantic, and Alfred Hitchcock's Mystery Magazine (no kidding!), etc., are a good start.

The other big missing piece is Canadian newspapers, though there are already more of them since last week. We currently have seven Canadian newspapers from which to choose, now including the Regina Leader-Post, the Windsor Star, and the Edmonton Journal.

Turn it on, and the voice - male or female - reads your text seamlessly.

Yes, at times the inflection comes off a bit robotic at times, but it's about a million times better than the old Winnipeg Transit telebus schedule. Anyone with a visual impairment would be well advised to buy the Kindle: it's a smooth listen, and the text can be enlarged once, and for all time, quite easily.

Light as a feather. Easier to carry around than a book, plain and simple.


What the Kindle is not good for:

It's no coincidence that you find the Web browser under "experimental" in the Kindle menu.

It doesn't look great, I'm only able to conjur up a bad-looking version of Wikipedia at this point, and navigating the browser with the joystick/keypad combo is irritating. More on that in a second.

No Winnipeg Free Press and nothing from the Sun chain. Last one there is a rotten egg!

There's no backlighting, which - at night - makes it no more useful than a book and a lamp.

4. Syncing with your iPhone

There's an iPhone app in the U.S. that allows you to sync your Kindle with your iPhone, so you can start reading a book on one, and continue on another. Cool!

It's not available in Canada. Not cool!

I hope that future editions of the Kindle have a touchscreen - I instinctively want to touch it to navigate around, but alas, I cannot.

The Kindle's joystick and "next page" button are fine for pure reading, but quite clunky for browsing online.

The iPhone touchscreen is better for navigating almost everything.

There isn't any. But I suppose that will change in upcoming releases.

7. Showing off your good taste in books

The Kindle shows off your great taste in technology, but not books. So no one knows if you're reading Shakespeare or Sarah Palin. Then again, that might be a good thing...

As Jeff Jarvis suggested earlier this week, we may not be far away from having permanent screens on our desks, where books, movies, music - whatever - reach out for our attention as opposed to us having to look for it. No more hiding that cell phone under the desk!

Overall, I'm quite happy with the Kindle. But the mind races at what might be in store for this device - and our info-lovin' brains - in the years ahead.
Posted by Kenton Larsen at 11:51 AM