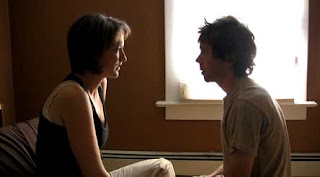 Garrity will visit Red River College on Thursday, Jan. 7 to discuss and show clips from the film, which has played at the Atlantic, Edmonton, Vancouver, and Calgary Film Festivals.

In the weeks following his visit, students will put their publicity and writing know-how to the test, putting together PR proposals designed to generate publicity, notoriety, momentum, and word of mouth for the film.

His first feature film, INerTia, was awarded Best First Feature at the 2001 Toronto International Film Festival, and he was named Best Director at the 2001 FilmCan Festival. In 2002, he was named one of three "Canadian Filmmakers to Watch" by the Globe & Mail.

Zooey & Adam opens in Winnipeg at Cinematheque on Friday, Jan. 29.
Posted by Kenton Larsen at 8:44 PM