How to have a number-one hit single in the UK - guaranteed! 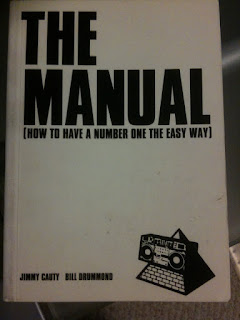 In my last post about "how to make money off of music," I neglected to mention the best way of all: by reading Bill Drummond and Jimmy Cauty's great book, "The Manual: How to have a number one the easy way."
The book is directed mostly at a UK audience, and involves the steps one must take in order to have a hit single on the British charts. So sure are the writers that their advice will work, they offer a money-back guarantee:

"The complete price of the manual if you are unable to achieve a number one single in the official UK charts within three months of purchase of this manual and on the condition that you have fulfilled our instructions to the letter."

Although the book was published in 1988, it's remarkably prescient: Drummond foresees a future in which you don't need to go into a studio to record an album, people plagiarize and steal your work days after it comes out, and promises that "flame will flicker."
By the way, this book is only available from the UK and in short supply. Amazon.co.uk has copies listed at 88 pounds - $170 each! I got mine for the 15-pound cover price a few years ago when it was rereleased for a limited time, which I'm sure it will be again.
If you can't wait, it's also available on eBay for a mind-bending $374. I'll tell you what: I'll photocopy mine for you for $40, proceeds going to Winnipeg Harvest and RRC's photocopy repair fund!
Dr. Who, Dr. Who. Hey!
Drummond is well known in the UK for being a member of the band the KLF, and having his own number-one single, the novelty number "Doctorin' the Tardis," recorded under the Timelords moniker. The song is pure camp, melding Dr. Who, Sweet, and Gary Glitter, which - anyone in my ad class will remember - still counts as "being creative:"

Among the duo's great advice:
1. Go on the dole (the UK's oft-celebrated version of EI): anyone with a proper job doesn't have time to record a hit. And being broke "fuels the fantasy" of being rich. J.K. Rowling, anyone?
2. Conduct research - listen to the radio, buy the Guinness Book of British Hit Singles, listen to any singles that have ever made the UK top five, etc.
3. Make the most of your studio time - you don't need the most expensive studio, because a hit single doesn't need to sound like a million-dollar production, unlike a hit album.
4. Your song needs a dance groove, must be no longer than 3:30, and the formula is simple: intro, verse, chorus, second verse, second chorus, a breakdown section, back into a double-length chorus and outro. Lyrics: you need some, but not many.
Sound familiar?
5. The ability to sing is NOT a requirement, and it will actually hurt your chance at your song's success. Voice quality and attractiveness only come into play if you want a "career," but you're only after a hit single, right?
6. Promotion - so full of advice is this section of the book, it's another blog post. Among their great advice is how to fool elitist DJs into thinking your release is a rare import and journalists into thinking they've "discovered" your song.
The success stories
Devotees of the Manual who claim to have followed its pattern to success include the Pipettes ("Your kisses are wasted on me!"), Chumbawamba ("Tubthumping," of course), Edelweiss (the Austrian band famous for using the word "Edelweiss" in its songs - don't ask, just accept that Austria has its own Wang Chung), and the Klaxons.

The Pipettes - Your kisses are wasted on me
by Cooperative-Music
So what are you waiting for? What will your number one hit on the UK charts be?
Posted by Kenton Larsen at 1:36 PM