The secret to never running out of ideas: a notebook 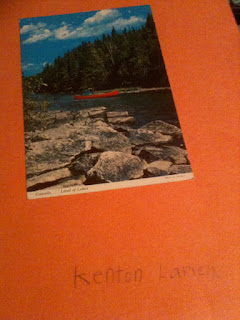 My first duotang: maybe you can tell a book by its cover.
"I'm just not creative." Wah, wah, wah!

I can't tell you how many times a year I hear the above line uttered in advertising class (minus the wah, wah, wah, because I've been banned from saying it around the office).

The reality is that anyone and everyone can be creative. All good writing - creative, comedy, advertising, blog posts, whatever - just comes down to paying attention, writing things down, and not criticizing your ideas for being "bad, wrong, or stupid" before they've even had a chance to breathe.

Great ideas rarely come to us fully formed, so the great thing is that you can write down anything that crosses your mind: ideas, dreams, jokes, stories, or whatever.

It's simply a numbers game: the more ideas you write down, the more good stuff you'll have to choose from later on.

And, in advertising, when your client shoots down all of your ideas, you save them up in a book, so you can use them for other campaigns later on; as NBC once said in its promos, "If you haven't seen this rerun, then it's new to you!"

My first duotang of ideas

I was considering this the other day when I was rifling through my mother's desk, looking for cash, blank cheques, and other negotiable instruments, and came across my journal (above photo), which must've been from when I was six or so.

The great thing about the book is that it's full of illustrations (see photo, below), poems ("The Old Owl with a Cowl"), parodies ("The Wrong Brothers"), and stories ("Atomic Man!") I wrote at the time, and most of them are - in fact - really terrible.

However, the book is also a really funny look into the things that a kid thinks about, and something that I could easily pull out for "a dramatic reading" the next time I do stand up. Say, now there's a great idea!

Fears of a clown

Case in point: "A funny clown," a story I wrote to work out my bad experience at the circus, where I had the heebie-jeebies scared out of me by what we called at the time, "a lady clown."

Although the story would be somewhat scary for a kid to think about, I think I called it "A funny clown" to remind myself that even if clowns scare the hell out of you, they're really not as scary as they seem. Right? Right? Who's with me?

"One day I went to the circus there was a funny clown. He had ten toes. They had a rodeo. The clown rode a wild horse. Then he went flying off the horse. Everyone heard siren of the ambulance. E-r-r-r-r-r-r-r He was rushed to the hospital.

"The doctor happened to be a veterinarian. He gave him medicine turned into a dog. The doctor said: well, better then ever! but he was a mea dog. He gulped up all the medicine.

"By that time he elephant's nose, a dinasour tail and a kangaroo's pouch. All the nurses were scream's (page cut off). They were hiding there faces. The turned back into a clown and walked away." 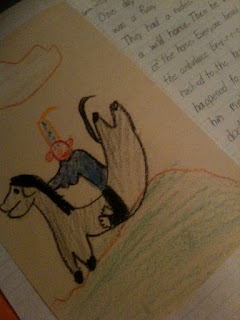 And all was right in the world.

Start your creative writing notebook today!
Posted by Kenton Larsen at 9:19 AM