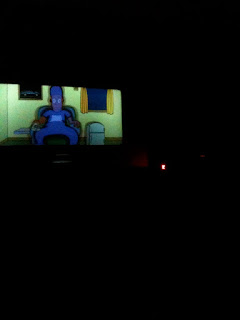 Pay no attention to the flashing, red light at the bottom of the screen.
Wah, wah, wah.
Love movies, hate movie theatres.

My love/hate affair with the cinema has been well documented on this blog, most recently last July when I named my five ways to improve movie theatres.

Among my recommendations to theatre owners:
To that list, CreComm grad Wade Argo adds "more comfy seats" and "enough with the morons who arrive at the last minute to ruin the experience of those who got there early to scope out their good seats."

As I said in my original blog, I'm hard pressed to think of any other service-oriented industry that treats its patrons with more disrespect and contempt, other than airlines and cell phone providers. But for sheer, "F*** you, patrons!" movie theatres win the grand prize.

For your consideration, I give you Cinema City McGillivray, where I went to see Zombieland yesterday. The film wasn't my choice, but I enjoyed it until the film's big cameo died and it became other tedious horror movie that ends in nonsensical action and violence at a theme park.

Movie aside, a host of humiliations and disappointments I did find at Cinema City McGillivray, including:

I knew that something was up when I generously treated my friend to the movie, and our two tickets came to a grand total of $3. They don't call me Moneybags Larsen for nothing!

So, the air was not thick with expectation or excitement as we walked through the lobby, and noted that there was no ticket taker to be found anywhere in the building, which means we could've just walked in off the street for free - $3 be damned! - like everyone else seemed to be doing.

As well, my least-favorite theatre innovation was operating in full force - the one that makes the multiplex an "amusement destination" and turns the movie theatre lobby into an arcade.

But instead of the irritating air-hockey game at Silver City, which is clearly audible inside the theatres - great planning! - I got the even-more-irritating dance-a-thon 2000 video game being danced upon by two guys, who had clearly played the game about 1,000 times before and came to the theatre wearing gym shorts under their pants for their big night out.

I don't want to begrudge our dancers for doing what they love, but the effect reminded me a lot of what it feels like to be in a New York City restaurant when a subway train hurls down the tunnel underneath it, sending everyone and everything flying across the room.

Two hours later, when I left the theatre, they were still dancing. Really, isn't that what the Nintendo Wii is for?

When I walked into the theatre about half an hour before the movie started, there were already loud ads blaring from the screen; to make matters worse, we in the captive audience were subjected to the same Stella Artois ad twice in a row - the one where "the cool guy" sends the paper boat across the fountain to "the babe" on the other side, and "the cooler guy" sends another boat to sink the first one.

It wasn't funny the first time.

The worst thing you could do as a purveyor of onscreen entertainment, then, would be something that would hurt the consumption of the product, right? Right!

For some reason, the good folks at Cinema City McGillivray installed the flashing, red Exit sign so close to the screen, the bottom, right quarter lit up with an eerie, red, flashing glow for the duration of the film (see above photo). Nice.

4. No ushers mean no respect

Yes, it's true that I took the above photograph with the iPhone in the theatre, which is bad. An usher should have stopped me.

I justify it on the grounds that 1) there was no flash, 2) I was in the back row, 3) I was exposing a greater evil than my own, 4) I took it during the ads/previews portion of the evening.

Not more than two seconds after I took the picture, a guy sitting nearby got a call on his cell phone - ring! ring! - and he actually answered it. Completely oblivious to my angry glares and catcalls, he merrily continued the conversation.

Throughout the rest of the movie, this same idiot constantly checked his cell phone for messages, and - even after realizing that he was pissing people off - kept his ringer on and, when another call came in, took it again.

I was the only guy who said something ("Shut up, Peppy!") and he didn't even react or look my way. Maybe because his name isn't "Peppy."

So I took the advice of my earlier blog, took out a piece, and wasted him. Lesson learned at the movies: one less zombie is always a good thing.

As luck would have it, I was reading the book The Age of Persuasion on the bus this morning, and found kindred spirits in authors Terry O'Reilly and Mike Tennant who, like me, are advertising guys who hate movie theatres and the ads they show.

When I knock ads in movie theatres - which I routinely do - people always call me on it for being an advertising hypocrite. "How can you knock ads when you teach advertising?

"The moviegoer has been demoted from welcome guest to mere chattel. Free (but ad-laden) magazines in the lobby promote upcoming films, ads appear in pre-movie slideshows projected onto the big screen, movie times are adjusted to include cinema ads among the "Coming Attractions" trailers, and all manner of product placements might be tucked within the feature film.

"It isn't the advertising itself that causes movie theatres to violate the contract. It's the erosion of the moviegoing experience, from an evening focused on giving the audience a hilarious, pleasurable, or cathartic time to a litany of non-entertaining sales devices designed to exploit a captive audience.

"And for this you pay them."

Less and less all the time.
Posted by Kenton Larsen at 10:12 AM