How to write good: Part I - the intro 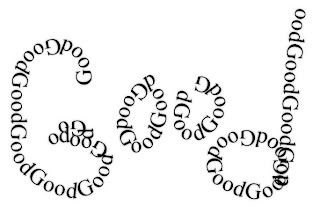 Stephen King says that anyone can be a good writer if they write for 30 minutes a day.

I say it seems like a huge time investment. Why not simply buy the TypeDrawing iPad app and draw the word "good" out of many little "goods"(see above)?

Over the next five or six blog posts (or maybe seven or 10 - I haven't planned it out, because planning is the natural enemy of the writer), I will provide all of the advice anyone needs to write good. Sorry: goodly.

In the immortal words of my seventh grade English teacher, Mr. Harrington: "That's not a zero on your term paper, it's a plum."

Part I: the intro

Now that I've got your attention: the most important part of your writing is the intro.

The intro should grab your readers by the throat and kill them - well, not literally kill them, because dead people don't buy books - but jolt them out of their humdrum lives and force them to read on.

To do this, start in the middle of the action, like the Dukes of Stratosphear (aka XTC) do with the narration at the beginning of their song, "Have you seen Jackie:"


The puffin sipped on his herbal tea and sighed, "You can't get the buttons these days."

Readers: "Puffins drink herbal tea? And sigh? And have trouble finding buttons? I must read on!"

2. Anna Karenina - "Happy families are all alike; every unhappy family is unhappy in its own way."
Readers: "Is this book about my family? I must read on!"

3. 1984 - "It was a bright cold day in April, and the clocks were striking thirteen."
Readers: "Doesn't this Orwell arsehole know that clocks don't have a number 13? I must read on!"

4. Invisible Man - "I am an invisible man."
Readers: "We know. We saw the title of the book. Get to the damn point already. I must read on!"

5. My own example - "The PR professional walked into the room, sat down in his leather chair, pulled a pipe out of his smoking jacket - red, his favorite color - lit the pipe, put his feet up on his desk, flicked some dirt off his shoes, and confidently said, "It's a win-win situation with ample parking and refreshments."
Readers: "I love ample parking and refreshments. And reverse type. I must read on!"

In journalism, the intro is called "the lede" which is about as appealing to say and write as "creme" with an e on the end or saying "scrum" and "meat before attribution" in mixed company.


"A 39-year-old man died yesterday after becoming impaled on a fence while running from police."

When you can write an exciting one like this?


"I'll bet that John Smith wishes he wouldn't have run from police yesterday, after the fucking bastard found himself impaled on a fence."

There are as many intros, ledes, and grabbers in the world as you can imagine. So start imagining them, and making up as many stories as you can think of - whether you're a creative writer, poet, or a journalist working for Rupert Murdoch.
Posted by Kenton Larsen at 5:47 PM