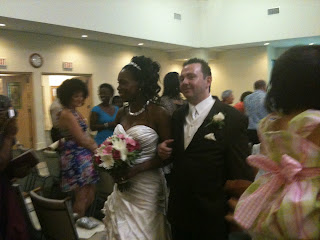 Elisabeth and Croft Petersmeyer Jingleheimer Schmidt.
I love the smell of roasted student in the morning.

I had a great time on the weekend attending my first former-student wedding - the former student being Croft Petersmeyer, who had the misfortune of being in the first CreComm class I ever taught, and the good fortune to marry Elisabeth Mague. All's well that ends well!

Even better, I got to make a short speech at the wedding. And it went something like this (cue wavy lines and dream music):

A salute to being Petersmeyeresque:

I’m Croft’s friend and before that I was his college teacher. This is a big day for Croft but it’s a bigger day for me – because this is one of the few chances I’ve ever had to tell a former student what I really think of him. In public.

Croft asked me to write jokes, so I brought along his report card. And I will read aloud from it: Advertising: C. Public Relations: C. Journalism: C. TV: C. Radio: C. Teacher’s comment: If you let me speak at your wedding, I’ll change these marks to As.

When Croft was a student, he once told me that he was either going to get an A+ or drop out of school. So, congratulations, Elisabeth – you’ve either got the best husband in the world. Or he’s going to disappear on the honeymoon and you’ll never see him again.

I know – and Croft knows – that he graduated, got hired at Pollard Banknote, and is getting married for one thing and one thing only: his looks. Ladies and gentlemen: have you ever seen a lovelier blushing bride than Croft Petersmeyer? I hope I sweat like that when I get married.

It’s hard to tell if Croft’s blushing, because his face is always red. The man is a human thermometer. And the long-range forecast is for high blood pressure.

Imagine the magical moment when Elisabeth told her family, “I’m in love with Croft Petersmeyer.”

“We all love Kraft Peanutbutter.”

Croft is disappointed because he wanted Elisabeth to take both his names, so he could say, “I’m Croft Petersmeyer, and so is my wife.”

Croft told me not to worry if no one laughs, because half the audience is French.

Croft is an intense guy – because he cares so much. Some would say too much. Croft’s class once got me to pretend we were going to have a test, just to make his head explode. He walked into the class and I announced the test. And I wish I could say I was surprised when his head actually exploded.

However, the class was very surprised when the pieces poured back together like Arnold Schwarzenegger in Terminator 2.

But that’s OK, because, for Croft, sex is like elves and hobbits – they only exist in his mind.

Croft was a great student and he is a great friend. And I want to say, thank you, Croft for that. And I’d like to wish you and Queen Elisabeth Petersmeyer all the best as you embark on a lifetime of happiness together.

Please join me in toasting Kraft Peanutbutter.
Posted by Kenton Larsen at 12:26 PM