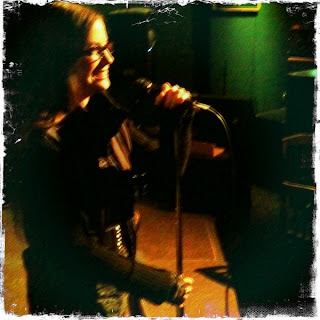 The hilarious Ms. Lachuta, I presume?
I've been jabbed to death by the porcupines of comedy.

We kicked off the first of our two CreCommedy nights at the King's Head tonight with a kick-ass night of laughs, courtesy of second-year Creative Communications students (aka the aforementioned porcupines) enrolled in my comedy-writing class.

All of our first-time performers should feel pretty great right about now, because there was nary a dead moment at tonight's show.

Special thanks to CreComm grad and headliner Dan Verville, who absolutely killed, destroyed, and tore up the room. And more thanks to grad Matt Cohen for organizing the whole thing. And to all of the other CreComm grads who came to watch and judge the big show.

See you for part two next Monday at the King's Head. Doors open at 7 p.m., show starts at 8.

A wonderful DVD of the evening's festivities will be available shortly. Watch this blog for more info.

Our panel of 12 judges have spoken, and selected the top three comics of the night:

Well done to all of our comedians! Incidentally, the point spread from lowest- to highest-rated is less than five marks out of 20. A squeaker that attests to the high quality of the show.
Posted by Kenton Larsen at 11:57 PM