The Freep lands on the iPad with a crash 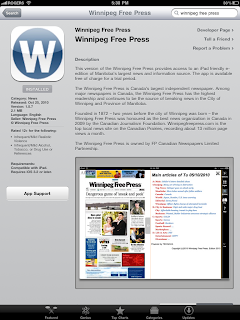 The low-res "W" logo on the Freep iTunes page says it all.

The good news: after years of threatening to go mobile, the Winnipeg Free Press has finally hit the iPad.

The bad news: the app crashes so much, it makes a strong case for going back to newsprint.

I really want my hometown to have at least one media outlet with a kick-ass local news app, but I'm sad to say that a revolution in mobile media this app is not.

The first sign that the Free Press app is in trouble is that you launch it and can't actually see a clear rendering of the newspaper for a long, long time. And slow down, Magellan: if you dare try to click ahead before the app is ready, you're in for a long, frustrating, and crashy ride into iPad hell.

At the bottom of the app (to the right of the lower, black bar, below) there are three buttons I've never seen before on any app, which - I think - show that the app is "thinking," "rendering," or "downloading." Or all three?

Trouble is, the numbers that these buttons show "counting down" don't appear to mean anything - "0 T, 261-4, 107-4," anyone? And at least one of the buttons appears to never stop counting down - that is, until the app crashes, which it does - over and over and over. 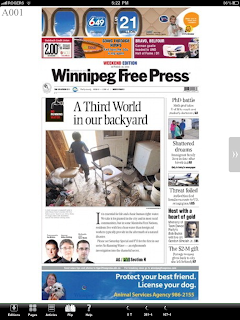 The main selling point of any news app is that you can grab the headlines and breaking news on the fly. Sadly, this app is only a badly loading PDF when it could have been a clear and simple RSS feed, much like the Winnipeg Headlines iPhone app, so that the news is updated all day, every day with breaking news, not just a static document.

And the two one-star reviews (apart from mine) on the iTunes store back up that observation: 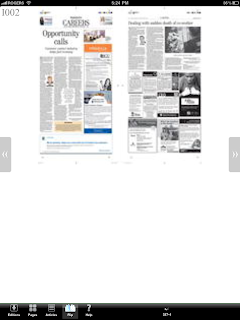 The forecast, like the page view, is hazy.
The best newspaper apps

By now, there are some great examples that show how to convert newspapers into awesome newspaper apps. They include:
***

"The app is available free of charge for a trial period," says the blurb on the Winnipeg Free Press page on the iTunes Store, but I can't imagine that anyone would pay for the app in its present incarnation.

John White writes about the Free Press app here and confirms the app is a "soft launch."
Posted by Kenton Larsen at 8:41 PM