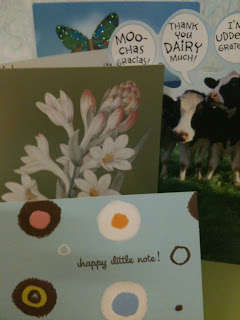 It's been an early harvest of thanks this year.

I woke up this morning to a lovely Thanksgiving email from a former student, thanking his instructors for "giving me the skills to allow me to be where I am today." And he's in a good place, so it wasn't sarcasm! Ha!

Nice or what? And he graduated when I still didn't know what the hell I was doing...poor fella.

A couple of weeks ago, I got maybe the sweetest card I've ever received from a former student; apparently, she'd thought about all of the times I'd acted like a buffoon in class, told ill-advised jokes, and mercilessly teased my students until they nearly cried, and wanted to thank me for keeping things entertaining. The trick worked!

So, let me just say thanks and "right back at ya" to all of the students who make and have made my job the very opposite of a thankless task - and whose thoughtfulness reminds me to be more thoughtful in return.

Join me in raising a glass to you!

Now, back to work: these frozen McCain pumpkin pies don't eat themselves!
Posted by Kenton Larsen at 1:12 PM