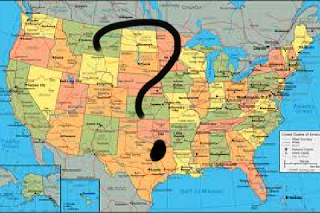 Jar Jar Binks or geography may be grounds for divorce.

I remember a student once told me that she was having misgivings about a friendship, when the friend in question announced that she loved Jar Jar Binks in the Star Wars prequels. That was the straw that broke the camel's back - and she ended the friendship.

Similarly, I once dated a woman in New York, who told me a geography-based story that made me not only question the relationship, but my very sanity.

Americans are well known for their love affair with knowledge in general and geography in particular.

When I lived in Boston at a young age, it was common for Bostonians to see my family's Manitoba license plate and ask, "Where the hell is Manitoba?"

Their stock reply: "Where the hell is North Dakota?"

I also recall studying for a big test at M.E. Fitzgerald School in Cambridge, in which we got a blank map of the United States and were asked to fill in blanks with the states and capital cities.

The studying paid off. I finished the test early and looked around the room while I waited for the test to end. I couldn't help but notice the girl next to me filling in some questionable locations: India, Puerto Rico, Russia, and basically any place she'd ever heard about in her life.

The oddity continued when the teacher got ticked at the class, because the only person who could name all 50 states and their capitals was (wait for it) "a Canadian!!!"

He dropped my paper on the floor with disgust, and I picked it up victoriously. I didn't chant, "U-S-A! U-S-A!"

Long-distance love affair - but how would she know?

My former New-Yorker girlfriend worked at a major investment firm with a name you'd recognize as one of the bad boys of Wall Street.

One day, the company president called a meeting of the firm's stockbrokers - each making millions of bucks a year - to let them know that they had just signed a new client from Japan.

"Would anyone like to show us Japan on a map?" he asked, pointing to a map of the world.

Not a single stockbroker was willing to take the risk.

When my girlfriend told me the story, I was gobsmacked.

"I know!" she said. "Can you believe they expected us to find Japan on a map?"

We are the world

The punchline: one week later, the same girlfriend broke up with me for "being too worldly."

"At least I can find the world on a map of the Solar System!" I yelled after she hung up the phone.

Oh, well. We'll always have Paris. Wherever that is.
Posted by Kenton Larsen at 1:33 PM