Why do rock stars think they can take their crappy lyrics and turn them into awesome children's books?

Why, because they know they can become a famous author in just five, easy steps:
I give you:

Who needs God when you've got a God-like ego?

Sting is the man who once wrote "Hey, Mr. Brontosaurus, don't you have a lesson for us?" but that didn't prevent him from reading the Bible and deciding he could do a better job. So, in 2001, he published "Rock Steady: A Story of Noah's Ark."

While five Amazon reviewers give the book an unbelievable five out of five stars, I'm with the lone reviewer who gives it one.

The reviewer calls himself "A Customer," but it's probably none other than Noah himself: "I have thrown my copy in the trash."

Somewhere between marrying young girls and crashing his car into trees, Joel penned this sappy love letter to his daughter, who - like his current wife - was already in her twenties when it was published in 2004.

The illustrations make the book even creepier - so much so that even the School Library Journal gives it a giant thumbs down: "This bland visual rendering of one of Joel's popular ballads takes what should be a universal declaration of love between a parent and child and turns it into a narrow, limiting sentiment."

Madonna trades in her pointy bra for something even more uncomfortable: the role of a moralist blowhard, who jumps to the defense of good-looking people everywhere.

Our author knows of what she speaks: as a hot babe, she knows that even the best-looking among us have to endure terrible things like, for instance, the jealous barbs of ugly people who are so cruel that they sometimes even pretend good-looking people don't exist.

The book resolves itself when the bullies realize the pretty girl's mother is dead, and - whew! - the pretty girl squeaks into the gang on a technicality.

4. Paul McCartney - High in the Clouds

The title of McCartney's kids' book seems to hint at marijuana legalization, but no such luck: the book is predictably a pro-vegetarianism treatise.

A squirrel sees his mom crushed by a bulldozer and he goes on a quest for a mythical island in which all animals can be free to do whatever they like - as long as the consumption of each other is not involved.

A 32-page, hardcover picture book in which a showgirl takes a dazzling adventure through the scary lands of narcissism and self-promotion.

The moral of the story, kids: Kylie's world tour is coming soon to a city near you, and you should buy tickets a.s.a.p.!

Ugenia has burning pants, because she lies a lot. Make up your own joke here.

7. Gloria Estefan - The Magically Mysterious Adventures of Noelle the Bulldog

A bulldog has trouble teething. I think. The most mysterious thing about this book is that it's in Spanish, which means that, at some point in the book, someone will hear the dog making noises and whisper to no one in particular, "El Diablo!"

How does it feel to write a tome like a complete unknown with no direction home?

Just a touch less depressing than the Bank of Montreal ad that hijacked "The Times They Are a-Changin'," Forever Young simply transcribes the lyrics to the famous Dylan song and places them amidst a cleaned-up, cartoonish version of the man's career.

Save your money for the Bob Dylan stuffed doll instead.

CreComm instructor Melanie Lee Lockhart loaned me the Paul Simon Children's book, called At the Zoo, and pointed out the best part, where "the hamsters turn on frequently."

What would Garfunkel say!? 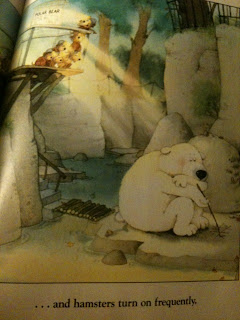