Hangin' with the Kids in the Toad Hall 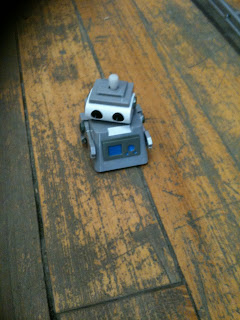 How do you sell a store full of thousands of toys in just 30 seconds without any visuals?

I'm not sure. Maybe if we go to the toy store, we'll find out!

Today, my first-year advertising class and I went to Toad Hall Toys in Winnipeg's Exchange District, so students could learn more about the place, the better to write a 30-second radio ad for it in tomorrow's class.

Oh, yeah: we also got to play with a buncha toys instead of sitting in a boring classroom. Did you hear that, other schools? Sucks to be you! 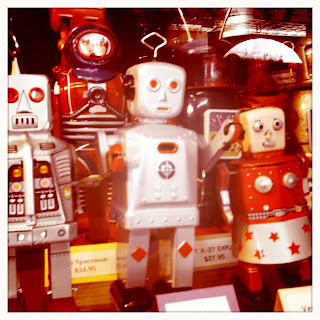 The robots say, "Nyeah, nyeah, nyeah."
To start the class, I asked how many students had NEVER been to Toad Hall Toys. Many raised their hands. "Nooooooooo!" I yelled over a long shot of planet Earth.

Working and studying in the Exchange District every day and NOT going to Toad Hall Toys regularly is a sad situation that must be remedied as soon as possible. So, off we went. 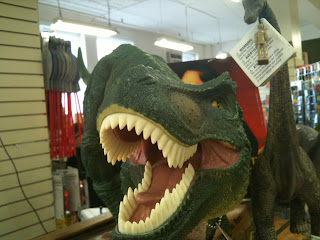 Toad Hall Toys is the most magical store in Winnipeg - from its swinging, wooden exterior signage, to the homey, warehouse-style interior and awesome stuff on display, like, oh...dinosaurs and rockets! 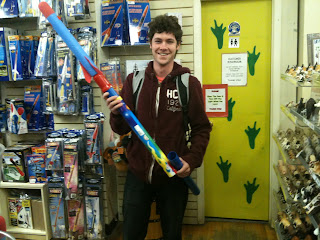 The true weapon is the mind. Which is why he has a rocket launcher.
And, for gentler folks, an awesome selection of magic, games, models, costumes, doll houses, puppets, and literature: 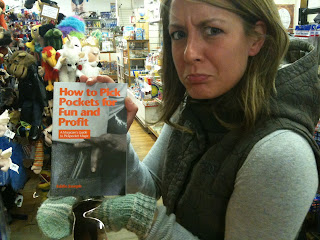 Where's my wallet?
Toad Hall's niche is its undying loyalty to the retro charms of train sets, dollhouses, board games, and the wooden and tin toys of yesteryear.

On a day when you're feeling blue or want to get away from "that one person at work who drives you insane," Toad Hall Toys is a pretty great escape. Grown men in suits have been known to walk in on a tight deadline to be found six hours later like this: 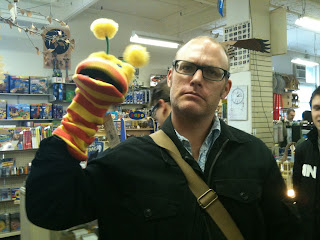 Find the puppet in this picture.
After our hour-long visit to the store, we returned to Red River College for PR class - where the sour expression returned to my face. Was it my sour disposition, or the "Extreme Sour Warhead" I had in my mouth while I taught?

Only I know for sure.
Posted by Kenton Larsen at 7:37 PM