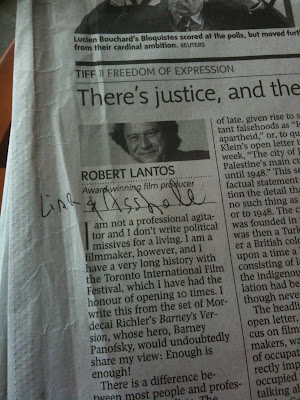 Marshall McLuhan, eat you heart out (click to enlarge).
A rogue writer at the Starbucks on Academy has single-handedly turned the Globe & Mail into Facebook.

What I expected to be a perfunctory trudge through old news at Starbucks this morning turned into one of the most entertaining reads I've had in a long time, thanks to a mystery media critic who had handwritten pointed responses to articles in last Thursday's edition of the Globe.

Pictured above is just one of his insights, in which he calls film producer and columnist Robert Lantos a "liar & asshole."

Ironically, Lantos' article is headlined "There's justice, and then there's propaganda," in which he accuses writer Naomi Klein and filmmaker John Greyson of propaganda and censorship.

"Their brand of censorship is at odds with our society's fundamental values: freedom of expression and freedom of individual choice."

Included in these fundamental values, presumably: the hard-fought right for all of us to refer to each other as "liars & assholes."
Posted by Kenton Larsen at 11:35 AM