Is today the beginning of the end for the album? 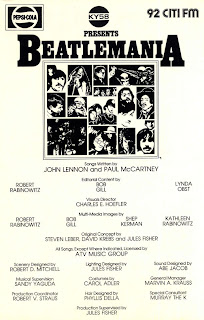 As every Beatles fan (which is to say "everyone") knows, the Beatles: Rock Band video game comes out today, in addition to two CD box sets representing the entire Beatles' catalogue - remastered in stereo and mono.

(I wrote about how much I love the Beatles here. Yay for the Beatles!)

We're getting very near the end

But there's a dark lining around this silver cloud.

These box sets are probably the compact disc's last hurrah - a victim of the newest format, which is "no format:" the invisible, intangible digital download featuring no jewel case, no album sleeve, and no liner notes.

While I'm sure that the Beatles will just as handily conquer iTunes, the online world is for singles, the compact disc is for albums.

When the CD dies, will the album die with it?

In other words, there may be more albums in the future, but we're not going to be caring about or perceiving them the same way we used to, if we even perceive them at all.

The Beatles helped usher in the album in the 60s; they not only wrote great hit singles, but conceived of them as part of larger musical works with rewarding concept albums like Sgt. Pepper's Lonely Hearts Club Band, Abbey Road, the White Album, Rubber Soul, and Revolver.

Remarkably, these were the days of vinyl, when listeners would curl up on the couch and ponder album covers and lyrics - only to have to get up, walk over to the stereo, and flip over the record every 20 minutes.

Not only did the songs matter, but so did their sequence and context, so that the whole album somehow became greater than the sum of its parts.

Just listen to Sgt. Pepper's "Good Morning Good Morning" and "Fixing a Hole" in the middle of a playlist, or "When I'm Sixty Four" without the "Ahh-ahhhh-ahhhh...." segue into "Lovely Rita." Even worse, listen to the title track on shuffle. It cuts off just as "With a Little Help From My Friends" is supposed to kick in. Arrgh.

These are crimes against humanity that can only be remedied by joining the album tracks together in iTunes - all of them.

You say goodbye, and I say hello

Of course, there are those, like Steven Hodson, who say that the album died a long time ago, when artists stopped making good albums.

"As the years passed and vinyl changed to cassettes which then changed to CDs, that fair exchange of money for quality music began to shift. Eventually it got to the point where you were lucky if there were two or three songs on that CD that you just paid $20 for were any good. If the musicians want to make more money then they need to start producing better music and less garbage."

I suppose that's true too. Thanks, Oasis.

I even sped the song up to 45 rpm to better hear John Lennon mutter, "I buried Paul" at the fade out (never mind that he actually says, "I'm very bored").

Five or six years later, I played the Magical Mystery Tour album in its entirety, and noticed a song after "Strawberry Fields Forever" that I'd missed the first 1,000 times I played it: a little ditty called "Penny Lane."

Then I realized that John Lennon's wacky costume on the album cover had something to do with a great song called, "I am the Walrus." Goo-goo-ga-joob!

I even developed a taste for "Flying," the instrumental credited to all four of the Beatles, and George Harrison's "Blue Jay Way," one of his many inscrutable songs that has nothing to do with Toronto's baseball team.

I suddenly realized what I'd been missing five years earlier: the other songs. I'm not sure what's more disappointing: that we may not get the other songs anymore or that musicians may not even try to write them.
Posted by Kenton Larsen at 10:24 PM